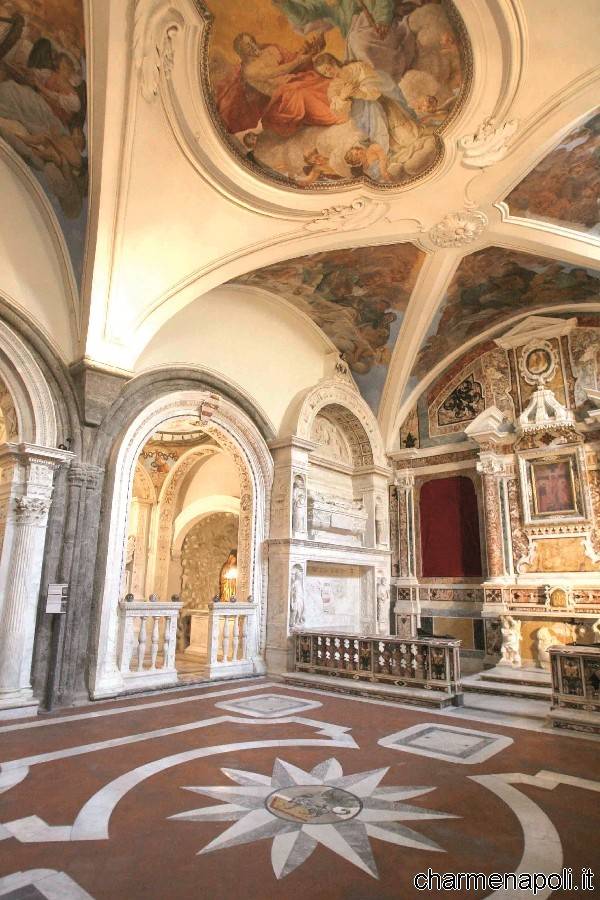 Descending from the San Martino hillside along the route of the ancient Roman decumanus inferior, the long, narrow street known as “Spaccanapoli” splits the city in two and takes pedestrians through an open air museum chronicling the entire history of Naples from as far back as the Greco-Roman polis whose defensive walls can still be seen in Piazza Calenda. In the 14th century, the Anjou kings opened up the city to make it the heart of their kingdom, and it wasn’t long before beautiful churches and monuments began to appear in the districts traversed by Spaccanapoli. One of the most important of these is the Franciscan Santa Chiara monastery in Piazza del Gesù Nuovo, built on the remains of Roman baths to include the basilica where the Anjou kings were buried, a museum and archaeological area, the majolica cloister and the 18th century nativity scene room. The Dominican order established themselves a store’s throw away in the monumental San Domenico Maggiore church built between 1283 and 1324 by Charles of Anjou. The complex was the university’s theology centre and welcomed many eminent scholars like St Thomas Aquinas and Giordano Bruno. [charme-gallery]The 10th century church of Sant’Angelo a Morfisa has a superb 14th century portal. Nearby, in the former Egyptian quarter, is the churchof Sant’Angeloa Nilo built as a family chapel in 1385 by Cardinal Rinaldo Brancaccio, whose tomb carved by Donatello and Michelozzo is the building’s finest artwork. Looking onto Via Duomo and built in 1575, the former church of San Severo al Pendino is a splendid example of 16th century architecture while, a few metres away is the paleo-christian church of San Giorgio Maggiore. Another iconic symbol of historic Naplesis the Real Casa dell’Annunziata complex with its characteristic underground church (the Subcorpus). Built during the 14th century, the monument housed the famous wooden “wheel”, a kind of revolving cylinder where abandoned children were placed. The wheel was last used on 22 June 1875.