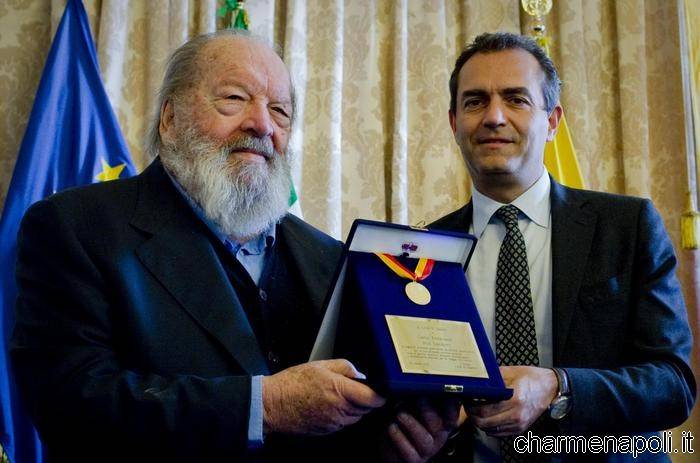 “And to think that I would never have believed it possible to be an actor, i owe everything to the sport. I feel first Neapolitan and then Italian”. He said Bud Spencer aka Carlo Perdersoli, 85 years, and 128 films to a past champion, received today, in Naples, in the town hall, where he received the Mayor Luigi de Magistris the medal of the city and a plaque with the inscription “a man in the round, actor, sports and Neapolitan.” Former swimmer gave the mayor his new cd. “My favorite song is ‘Futtetenne‘ – he said – I’m happy to do that to her gift”.
The actor has said so proud to have brought his city in the world thanks to his work. But also “honored and moved” by the mayor to receive the coveted award, crowning a great career as a sportsman and as an actor. Bud Spencer has proudly claimed first achievements in swimming and water polo, the “two Olympics”, having competed with many world champions and the merit of being the first Italian to get under the minute in the 100 freestyle.
Unlike its historical partner, Terence Hill, who “studied much,” Pedersoli admitted to being finished by chance on the big screen. “Is all about the audience that he appreciated my movies and laughed watching these scenes”, he said, remembering all the films shot, some “in French, English, German and Hungarian”, thanks to which he won in 2010 the David di Donatello for his career with his own mate fistfights in every movie.
“Is a great man first, before an actor, an athlete and a musician – said de Magistris – made film history and has never forgotten his city. Naples and Bud Spencer are one”.