Home News Valentine’s Day by night, Naples you love under the moonlight 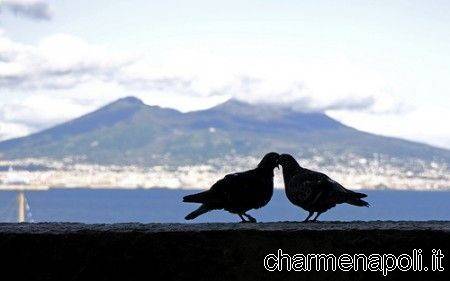 Naples, city of love! How not to lose your head in front of the magical charm of the beautiful Partenope? And then all of the shadow of Vesuvius on February 14th! Everyone in the Gulf city to celebrate Valentine’s Day, within and beyond the usual horizon of opportunities which, as has become tradition, the famous Valentine’s Day offers. Also this year, in fact, Naples is no exception tribute to feelings. And it does so by capturing the attention of citizens and tourists with its beauty, in a night of cultural events spread a little  at all sites museums of the capital.

The ” Night of the lovers of Naples” is an event organized by the Culture and Tourism of the Municipality together with the Academy delle Belle Arti and in collaboration with the superintendents, museums, cultural institutions and the tourism industry. An initiative of serious and funny at the same time, designed to fall in love and fall in love with Naples in Naples and also an invitation for tourists, young and old, to rush to the mass in Naples and visit its most beautiful and famous.

In the program there are, in fact, paths lit by torches, toast under the stars and scenic walks at sunset. For the “Night of the lovers of Naples” the City has also agreed the extraordinary opening of numerous museums with highlighting , in particular, of those collections and more directly will call the “sweet and loving affection”, with themed tours , other events and also special offers designed specifically for couples.

Is this, for example, the case of guided tour to discover the wonders of the National Archaeological Museum inspired by the theme of love represented by the works of antiquity and literary expressions. A great opportunity to tell of love due, possible and forbidden. A journey through images and works : the Farnese Hercules, Farnese Bull, the Antinous Farnese, the relief of Orpheus and Eurydice, and several frescoes from Pompeii. Myths, Gods and Heroes who tell stories of love ready to resume life through readings of Apuleius, Hyginus, Lucretius, Ovid, Seneca and Virgil.

And what about the visit to the Museo Duca di Martina, cot last, poignant love of King Ferdinando IV of Bourbon for the beautiful Lucia Migliaccio? The tour will be dedicated to entertainment at parties and in the rich mansion that King gave his wife, Sicilian nobleman known in Palermo in 1806 and married in 1814, with a stir because just three months after the death of Queen Maria Carolina.

Not to be missed, absolutely, the two routes proposed by the Interdisciplinary Studies Center “Gaiola non-profit organization”: a visit to the park submerged kayak and tour the moonlight in the Archaeological Park of environmental Pausilypon. Visitors will walk the Grotta of Sejanus in the light of a flashlight.

Finally, the reference point for all of Naples, a bright red heart button, made by the Scuola Nuove Tecnologie dell’Arte of Accademia delle Belle Arti, will be installed on February 14 in a panoramic position, visible from all over town. Edited by CoopCulture.