Home History The wonders of Villa Comunale, a stone’s throw from the beach in... 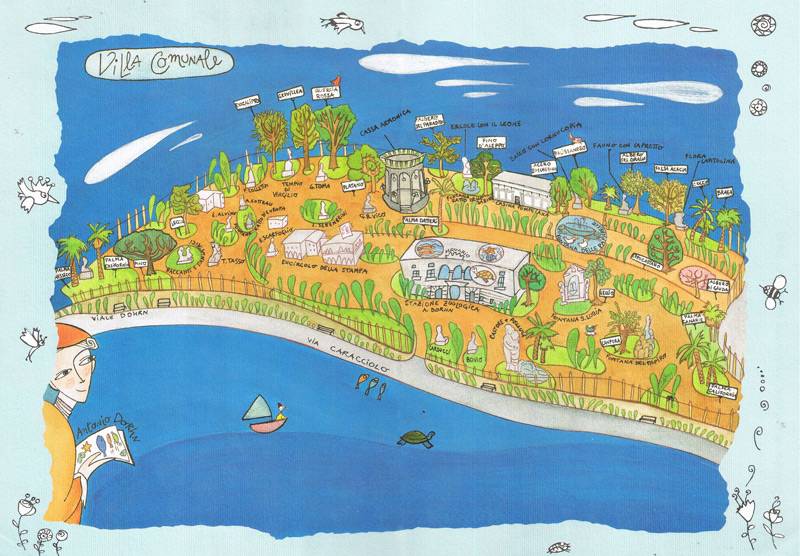 A Real Walk a few steps from the beach in Naples. The Villa Comunale , with its gardens, fountains and statues that adorn the beautiful green spaces of the park stands in the heart of Chiaja , like a precious gem set in a ring .

It was the Viceroy Luis Francisco de la Cerda , Duke of Medinaceli, at the end of the seventeenth century to elect corner of paradise from Monte Echia reaches up to Posillipo , with the ” aristocrat walking” decidendone the paving of the soil, the installation of trees , fountains and stone benches .

Then it fell to King Ferdinand IV of Bourbon making what is now the Villa Comunale of Naples , an even more magnificent and spacious garden . The king wanted to be inspired by the most famous of the “promenades ” in Paris and so he decided to entrust the work plan architect Carlo Vanvitelli, son of Louis, the famous builder of the palace of Caserta , with but a single categorical indication ” must be a walk from the King” . Charles did not pray , and in no time at all, also the capital of the Kingdom of the Two Sicilies had its famous promenade regal .

Statues and gardens of the villa

Access to the gardens was initially reserved for the upper echelons of the Neapolitan nobility who could access the park di Chiaja through four entrances: one from Piazza Vittoria, and the last two from the Riviera to the height of Cassa Armonica . The entrance to the noble walk was subject to a real Regulations for the use of the Royal Villa of 1826 and prohibited the access to those who “dressed indecently, with liveried servants and the people dressed in tattered clothes”.

The garden was inaugurated on 11 July 1781 and was extended from Piazza Vittoria to the cloister of the Cassa Armonica . It was enclosed on three sides with a high iron gate , punctuated by tall brick pillars . The renowned urban planner , using the advice of the gardener Felice Abate , built long parallel avenues , partly covered by a grillage . Particular attention was paid to the beauty of the sea near the Gulf , visible as a strong rural terrace of two rows of bleachers are used for seat and numerous fountains and statues.

Central Avenue was built in the Fountain of the four lions that also housed the sculpture of the Farnese Bull , then transferred to the National Archaeological Museum because of the damage of the sea air . In their place was imported from Salerno, the millennial Cup Porfido embellished in the center with a head of Medusa. On the sides of the fountain, was erected the sculpture of the Seasons , the work of a sculptor from Carrara end 700. And a short distance between the green of the flower beds , saw the light of the baroque fountain of Saint Lucia . The work, designed by engineer Alessandro Ciminiello and built in 1606 by Michelangelo Naccherino was literally dismantled and moved to the heart of the Royal Promenade , near the waterfront district of Saint Lucia , where once stood and where he got the name .

On the right was placed also the Casina Pompeiana with within the cycle of fresco paintings by Federico Maldarelli . Ahead on the left , another famous building was erected : the Zoological Station built by the German naturalist and zoologist Anton Dohrn , with the aim of promoting scientific research , giving hospitality to scientists who needed to marine organisms for their studies . Today the structure is one of the most important public research institutions in the world in the fields of marine biology and ecology as well as home aquarium oldest in Europe .

From there, a little further on stands the Cassa Armonica , the temple Nouveau cast iron and glass designed by Enrico Alvino in 1877 , accompanied by Giambattista Vico monument to Leopold of Bourbon, with finds of bronze Pietro Massulli . Still, of equal historical significance what was once the Press Club , designed by Luigi Cosenza and Marcello Canino.
The framework and the very image of the villa changed with the passage of time , even on the basis of the new styles of neoclassical and the various artistic influences that gradually came to lick even the ancient capital .

Significant from this point of view , it was the work of the French-Italian Stefano Gasse that between 1807 and 1815 , he built the temple with Ionic bust of Virgilio (by Tito Angelini ) that still dominates in the gardens of the villa . He was also in creating a significant widening of the scope of the promenade of Naples in the early 800 , extending the surface area of the gardens up to the present Piazza della Repubblica .

Also in those years that even the building of the fountain Rape of Europe by Angelo Viva that pays homage to the female figure with a complex of sculptures depicting a woman intent on retaining its mantle and two sirens on either side .
Neo-classical style , like the others, is also the Fountain of the Rape of the Sabine realized by Angelo Violani and Tommaso Solari, the authors of the Fountain of Orestes and Electra inspired by the myths of Greek literature .

The Villa Comunale during the Second World War

After 1860 , coinciding with the announcement of the unification of Italy , the Villa was open to all and called Villa Nazionale. A year later, Enrico Alvino presented a project for the improvement and expansion of Piazza Vittoria and the construction of a new road that skirted the gardens to the sea , ie the current Via Caracciolo.

There, then , was erected the monument dedicated to General Armando Diaz , commander of the Italian armed forces of the Great War by Francesco Nagni and Gino Cancellotti , on the main boulevard of the monument to Sigismund Thalberg Giulio Monteverde . During the Second World War , the area of the villa was used as a camp by the German troops stationed in Naples , and also suffered extensive damage as a result of Allied bombing . In 1999, after years of extensive renovation , the Villa Comunale of Naples took on its current appearance.