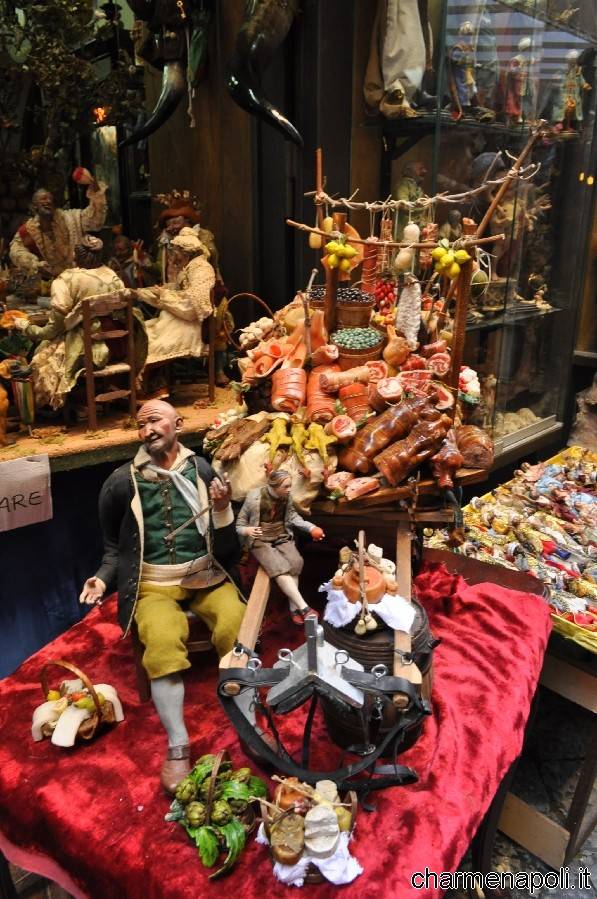 Some climb Everest, others do bungee jumping, but hardened thrill-seekers venture into Naples’ Via San Gregorio Armeno at Christmas time. But, seriously, experiencing the street famed for its nativity scenes is well worth the effort of riding the tidal wave of visitors during the holiday period. The ideal route into the area starts from the metro station in Piazza Dante: go through the Port’Alba archway and along Via San Sebastiano with its numerous bookshops and musical instrument shops. Then turn into Spaccanapoli with Piazza del Gesù and the Santa Chiara monastery behind you and, as you walk, admire the beautiful noble buildings on either side and breathe in the heady aroma of the region’s local dishes and delicacies, from limoncello to pasta and patisserie. [charme-gallery]Beyond Piazza San Domenico Maggiore and a short stretch of Via San Biagio dei Librai, an opening on the left leads you into the unique and magical realm of nativity figures. This ancient street joining the two ancient Roman decumani, now called Via Tribunali and Spaccanapoli, is heavy with the perfume of moss and bark from the hundreds of tiny shops and workshops whose craftsmen make nativity scenes and figures to suit all pockets, including some whose families have been nativity artisans for generations. The shops and stalls sell everything you need for a nativity scene: buildings and features made of cardboard and tree bark, some supplied with electricity for extra realism; small, hand-painted terracotta figurines alongside others up to 50 cm tall with hand-stitched costumes; tradesmen like greengrocers to pizza-makers and the classic nativity characters of the shepherd, Wise Men, Holy Family and stable animals. [charme-gallery]Every self-respecting Neapolitan goes to San Gregorio Armeno at Christmas to enhance the family nativity scene with the addition of at least one figure, some of whom come from the world of entertainment, sport and politics such as Diego Maradona or Luciano Pavarotti. In addition its nativity figurines, the area has is also famous as the birthplace of important Italian writers and philosophers, such as Gian Battista Vico, Francesco de Sanctis and Benedetto Croce. It is also a centre of cult worship centred on the monastery of Saint Gregory of Armenia, reputedly built on the ruins of the Temple of Ceres in 930 AD. The enclosed nuns have taken vows not only to Saint Gregory but also to Saint Patricia, a popular saint among the Neapolitans who regularly flock to witness the liquefaction of her blood.[charme-gallery]