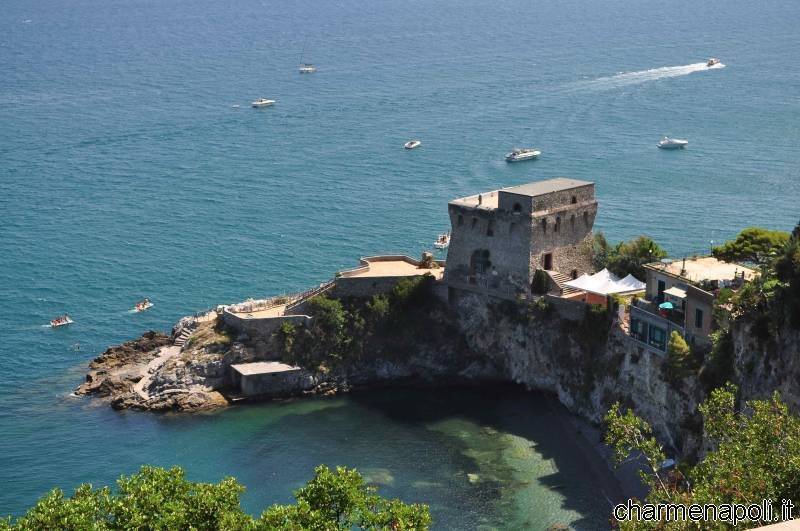 Views, towers, churches and beaches attract tens of thousands of tourists to the routes of the Republic of Amalfi every year. Breathtaking scenes unfold a few paces from the waves. Welcome to Paradise, the Amalfi Coast, where strips of sand and pebble beds unite the horizontal waves and the vertical cliffs. Roberto Pellicchia’s “Le 100 Spiagge della Costiera Amalfitana” is the first title of the “Cart&guide” series of Officine Zephiro.

A hundred beaches glittering on the shore of Campania Felix. From Vietri sul Mare to Cetara, from Amalfi to Eriche, from Positano to Punta Campanella, the bays of this coastline are so beautiful and precious that they merit a better painter than Michelangelo.

We choose the most representative, we cannot but begin with Vietri sul Mare and the mythical beach of Cresterella, a wide expanse of sand characterised, on one side, by the splendid view of the rock stacks of Vietri and the skyline of the city of ceramics, and on the other, by the imposing presence of an old guard tower, Torre Cresterella, remains of XVI century defenses against Ottoman pirates.

From Vietri to the village of Erchie, where bathers and visitors encounter a panorama of fable, the Marina of Erchie, one of the best known and frequented bays between Cetara and Amalfi. The small suggestive bay is set between two promontories each with a tower, Torre Cerniola to the left and Torre del Tummolo to the right.

At Cetara there is the famous inlet of Collata, dotted with boats, with its elegant beach accessible only from the sea.

At Maiori, the miniscule bay is constellated by dense lemon groves which cast a shadow on the shore, as if to represent, in a phantasmagoric play of colours, the affinity of the two great riches of this land: citrus fruit and the sea.

From Maiori to Amalfi, the first Italian Marine Republic with its extraordinary cathedral which preserves remains of the Apostle St. Andrew.

Amalfi is history, fascination and tradition. A mixture reevoked in the beach of Santa Croce, reached by a steep descent of 364 steps. The bay owes its name to a cave which contains the remains of a medieval chapel dedicated to the Holy Cross. For centuries, both the cave and the beach were used as a landing place by the merchants of the Republic.

Positano also reflects history and tradition. Here, Flavio Gioia invented the compass, and here, the Madonna asked to be “placed” by sailors who were transporting her over the sea. And here, is the famous beach of Fornillo, which owes its name to the old guard tower, today known as the Clavel tower, from the Swiss dramatist who bought it and restored it at the end of the last century. The pebble beach, 35 metres long, is flanked by two rock formations which protrude, like two arms, into the splendid crystalline sea.

Conca dei Marini, real pearl of the Amalfi Coast is a masterpiece of nature suspended between the land and the sea. Houses above Marina di Conca, along the slopes of the coast, cascade down to the sea and the beach called Le Vite.

Finally the Bay of Jeranto: a deep inlet immediately behind Punta Campanella. It is part of a marine wildlife park and the land is subject to conservation limits to preserve the integrity of the ecosystem. Here, on the shores of this corner of paradise, are the fishing village of Marina del Cantone and the village of Nerano. On the right side of the bay are the remains of an ancient Roman villa of the II century, while further up there is an old quarry which is now apart of a trail of industrial archaeology. (tr. John Perchard)