Home History Excavations Shows with the flavour of death 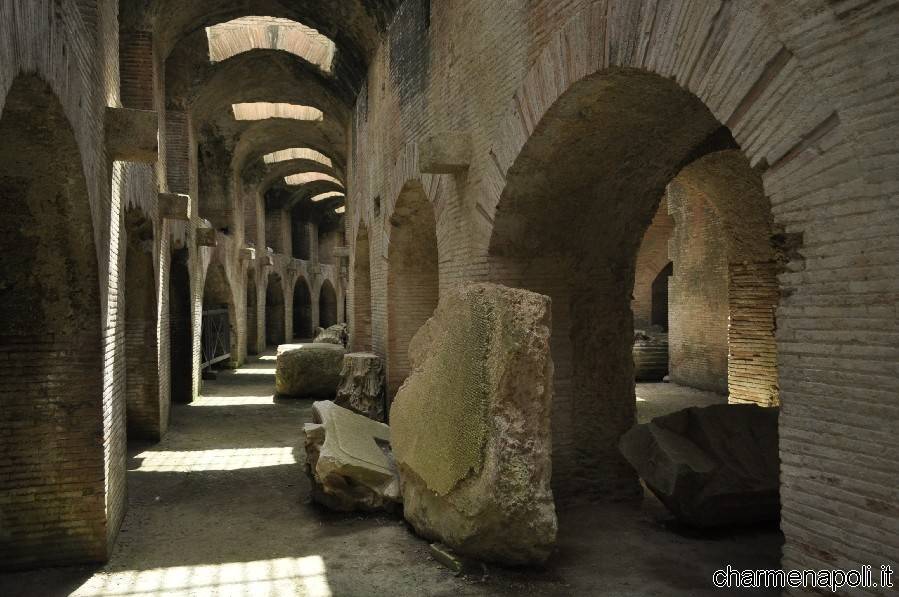 Spartacus led 70 gladiators from Capua(Santa Maria Capua Vetere) against Rome, but the rebellion ended in a bloodbath, just like the gory battles they fought in the arena. Campania’s numerous amphitheatres, three of which are open to the public, hosted shows of mortal combat (munera) involving professional gladiators, prisoners, criminals and slaves of both sexes (fights between women were particularly popular) and  fights with wild animals (venationes) like elephants, bears, bulls and tigers from all over the empire. Attracted by the edicta (advertisements painted in red on the town walls), 20,000 spectators flocked to the Pompeii Amphitheatre (built about 70 BC), although women had to sit on the tops steps or summa cavea. Nowadays, plays are performed in the arena but the amphitheatre still seems to resound to the clashing weapons of up to 100 gladiators fighting at once: retiarii armed with trident and net against the heavily armoured murmilli so excited the crowd in 59 AD that fighting spread to the terraces and the town. [charme-gallery]Supporters fromPompeii clashed with rival fans from Nuceria, resulting in hundreds of casualties and the closure of the amphitheatre for 10 years. Spectators seated on the white marble terraces of the Benevento Amphitheatre, built at the time of Nero, or in the Amphitheatre of Santa Maria Capua Vetere (1st century AD) enjoyed the same gory shows. The latter could accommodate 40,000 spectators seated in three orders of terraces: plebeians on the upper levels, wealthy citizens in the centre, and tribunes, priests, senators and magistrates nearest to the arena to get a better view of the gladiators and the wild animals hoisted in cages through trapdoors.[charme-gallery] It was from the famous gladiatorschoolofCapuathat Spartacus the Thracian led the revolt of the gladiators. Joined by 70,000 slaves, they set up camp onMount Vesuviuswhere they long held off the Roman legions, until they finally capitulated near the river Sele and Spartacus died. There were two other amphitheatres nearby: proof of the widespread passion for gladiatorial combat that had spread from the Sannio district to all the lands conquered by the Romans. Little now remains of the late Roman Amphitheatre at Sessa Aurunca, but the Alife Amphitheatre from the Augustan-Tiberian age was discovered as recently as 1976 after its outline was spotted in the fields and its arena was excavated. The Flavian Amphitheatre of Pozzuoli (built in the reign of Nero) was another combat venue and was also chosen as the arena where San Gennaro and his companions were to be thrown to the wild animals, but the beasts wouldn’t attack the patron saint as he prayed in front of them, so he was beheaded by order of Diocletian. Two steep ramps lead to the centre of the arena where fear, courage or hope accompanied so many to their death.