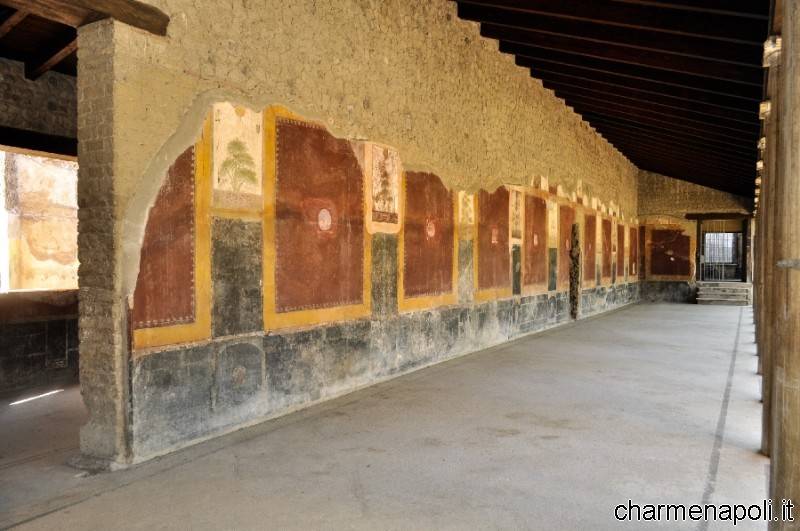 The remains of villas hidden, or perhaps just not well known, on the margins of the Empire bear witness to the glory of Rome in the Gulf of Naples. Not only Pompeii, Oplontis and Herculaneum, whose relics are on display at the Naples Archaeological Museum and in the New York Metropolitan, but Stabiae and the other archaeological sites around Mt. Vesuvius are brimming with astonishing treasures waiting to be discovered. The ancient temples, lavish Patrician villas and farms buried by the eruption of Vesuvius between Castellammare, Boscoreale and Nola will delight and enthral all those who find them. On the slopes of Mt. Somma near the town of Ottaviano stands a majestic Roman building dating back to the early Imperial Age.[charme-gallery] Buried by lava on several occasions over the centuries until it was discovered by chance in the 1930s and then gradually brought to light after 2002 through excavations overseen by the University of Tokyo, this was probably the residence where Octavian Augustus Caesar died. This huge, monumental building includes a lavish colonnade, finely decorated walls and a mosaic floor, but the Japanese digs have extended the site to the north-east where the marble torso of a satyr and two exquisitely decorated rooms have been discovered. A stone’s throw away is Boscoreale, one of the towns dotted around the crater of Mt. Vesuvius, which owes its name to the dense woodlands that were a hunting reserve of the Anjou kings in the 14th century.[charme-gallery] It was formerly known as Pagus Augustus Felix Suburbanus, a country estate on the outskirts of Pompeii where archaeologists have discovered a number of Roman farmhouse villas dedicated to growing cereals and grapes and raising cattle, although only one of these has been properly excavated, restored and opened to the public. Villa Regina now houses the Antiquarium museum but the villa itself is relatively small with just a few modestly decorated rooms and a wing where archaeologists discovered a marble statuette of Bacchus: a typical example of a small farm dedicated to wine-making. The same activity was carried out at Varano on the hillside above Castellammare where the Bourbon dynasty initiated digs in 1749 which have brought to light some stunningly beautiful buildings buried by the 79 AD eruption. Much smaller than nearby Pompeii and Oplontis, Stabiae was more of a holiday resort than a town proper, but it nevertheless offers an insight into the leisurely lifestyle of Roman patricians who displayed their lavish ornaments and art works in luxury villas enjoying spectacular views of the Gulf of Naples. [charme-gallery]The residences were complete with lavishly decorated baths and porticoes, much of which have yet to be excavated, such as the co-called Villa del Pastore or Villa of Anteros and Heraclo. Villa San Marco, whose 11,000 square metre site makes it one of the largest coastal residences of its time, and Villa Arianna, whose mythological paintings suggest it was the oldest building in the area, are both open to the public. The building known as the “secondo complesso” yielded the floors that were removed by the Bourbons and are now trodden by visitors to the Naples Archaeological Museum.