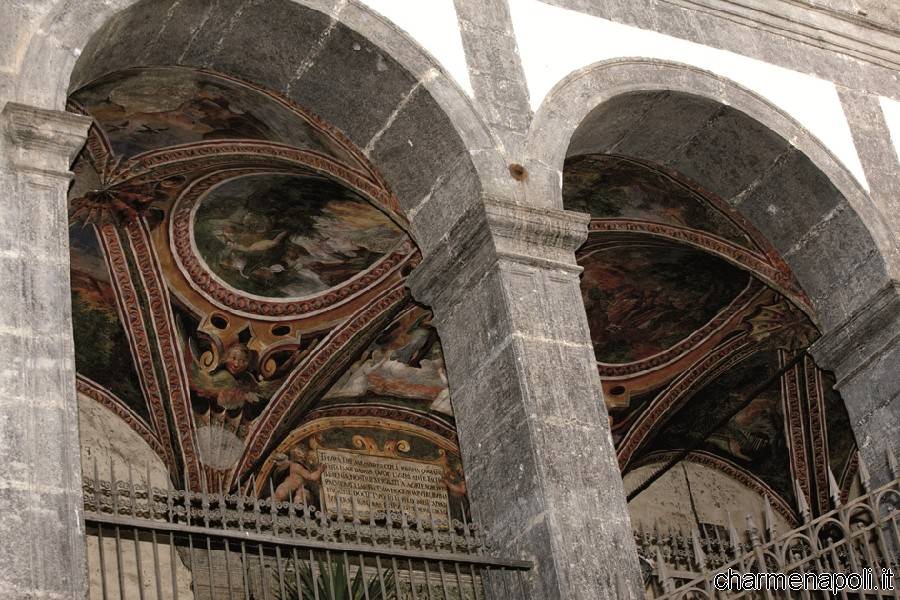 A trip through twenty-five centuries of history, art and culture is not science fiction but reality in the historic centre of Naples. You need no time machine to visit the Greco-Roman city and get back to the future here: simply stroll along the Decumanus Superior and watch the classical, medieval, renaissance and baroque worlds pass in front of your eyes, because the ancient Roman street bounding the northern limit of the ancient city is now home to many illustrious monuments and buildings. Our journey starts in Largo Regina Coeli with the Santa Maria Regina Coeli church and convent, whose renaissance style was modified by Francesco Antonio Picchiatti and perhaps others to give it a more baroque connotation. The staircase, frescoed by an unknown Flemish artist beneath the original 16th century façade, leads to the 18th century aisle and chapels and the spectacular 17th century wooden ceiling by Pietro De Marino housing canvases by Stanzione. [charme-gallery]The works of Luca Giordano, Micco Spadaro, and many other artists are also present. Via Anticaglia takes us further back to the Greco Roman city and the theatre where the emperor Nero once reputedly performed and which is still visible in the brick arches above the road and in a nearby garden. In Largo Santi Apostoli stands a church reportedly built in 468 on the ruins of the Temple of Mercury but given a baroque appearance when restructured by the Theatine fathers in 1609. The work was entrusted to Francesco Grimaldi, with the interiors decorated by Giovanni Lanfranco and Francesco Solimena. The dome was completed in 1680 by Dionisio Lazzari, while the side chapels house paintings by Nicola Malinconico, Domenico Frasella, Paolo De Matteis, Francesco De Mura and Agostino Beltrano. The monumental chapel in the right transept was designed by Ferdinando Sanfelice in 1713 and contains Naples’ only work by Francesco Borromini, the white marble Filomarino altar, and the baroque sacristy makes the Santi Apostoli one of the most beautiful churches in Naples.