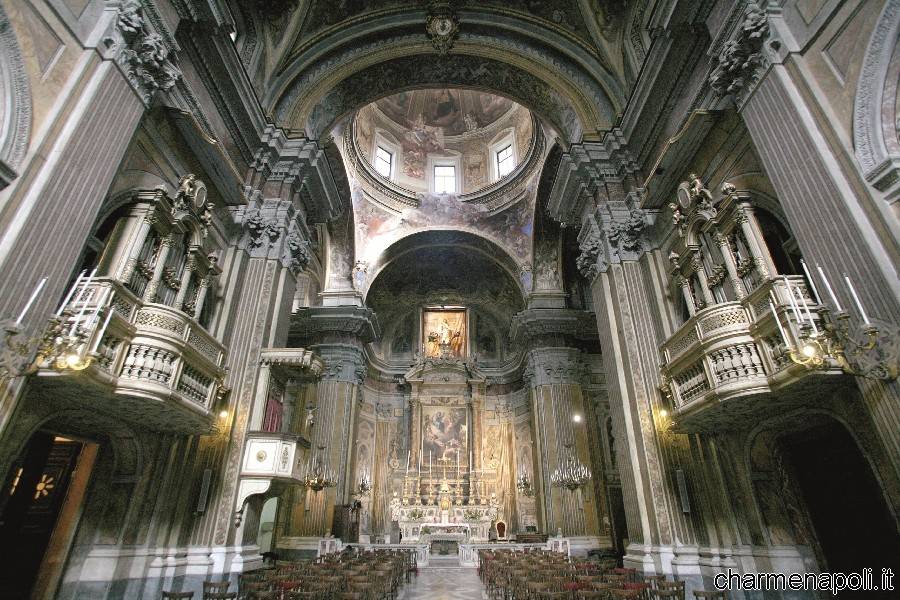 Monumental. Massive. Majestic. The façade of San Ferdinando enhances the already magical atmosphere of Piazza Trieste e Trento by almost reaching out to the semicircular colonnade in the adjacent Piazza del Plebiscito, while its exquisitely restored interior makes it one of Naples’ most beautiful churches. However, San Ferdinando is also home to the works of artists who transformed a church into a jewel and, at the same time, the parish church of the faithful from the backstreets of the Spanish Quarters. Commissioned by the Jesuits to Giovan Giacomo di Conforto in 1622, it was initially dedicated to Saint Francis Xavier but, after being enlarged by Cosimo Fanzago it was named in memory to King Ferdinand IV, later becoming the church of the Bourbon nobility and artists. [charme-gallery]The atmosphere is breathtaking as you cross the threshold, leaving the bustling square behind you and entering the evocative ambience created by Conforto’s mannerist-baroque embellishment of the aisle and ceiling. The dark arches accentuate the bright light of the central dome with its kaleidoscopic interplay of light, shadow and chiaroscuro spreading to the side chapels embellished by such eminent artists as Maldarelli, De Matteis, Sarnelli, and Spagnoletto. The San Ferdinando also houses sculptures, such as Domenico Antonio Vaccaro’s “David and Moses” and Cesare Fracanzano’s “the Conception”.[charme-gallery]The church’s ancient splendour has survived through the centuries. It is still the seat of a Confraternity founded in 1522 and the atmosphere inside makes it easy to imagine King Charles of Bourbon seated in the aisle church with his entourage of the Neapolitan court. One curious feature is that a royal decree apparently forbade burial inside the church, the only exception being the monumental neoclassical tomb built by Tito Angelini for Lucia Migliaccio Partanno di Floridia, wife of King Ferdinand I.