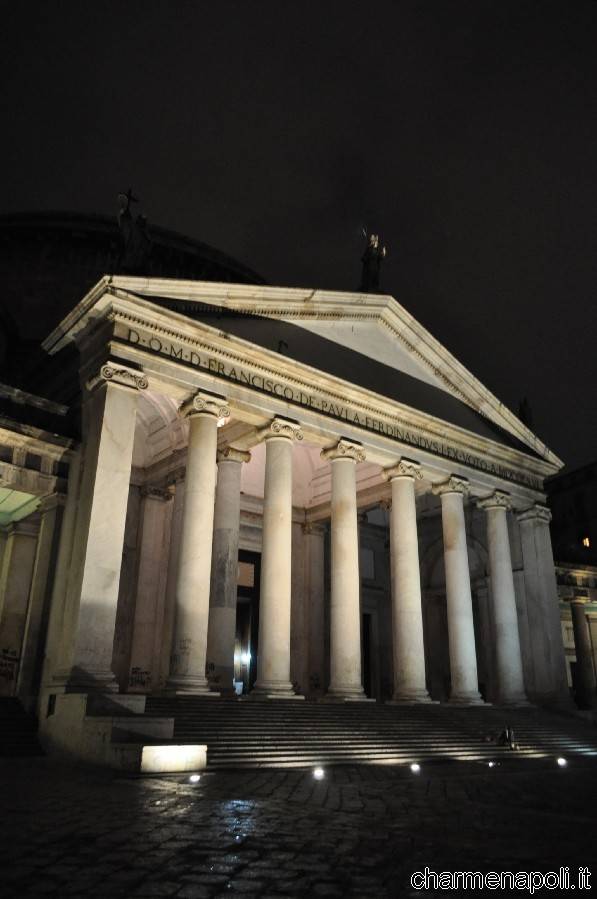 Between the bustling quarter of Pizzofalcone and Piazza Plebiscito is the majestic basilica of San Francesco di Paola, which was modelled on the Pantheon in Rome and built by Ferdinand I to give thanks for the restoration of the Kingdom of Naples. The broad colonnade reaching out towards the Bourbon Royal Palace and the San Carlo opera house is, some say, a metaphorical allusion to God’s arms outstretched towards the kingdom, although archive sources maintain that the portico was constructed by order of Joachim Murat before the church was even built. The view across the square is breathtaking: the immense colonnade opposite the splendid façade of the Spanish Royal Palace with Mount Vesuvius visible in the distance as well as the grandiose architecture of the church’s central dome flanked by two smaller cupolas. Unusually the church has a circular plan and, inside, the marble columns, art works and pews follow the flowing lines of the walls and perpendicular features are banned. [charme-gallery]The central dome is supported on thirty-four 11 metre-tall Corinthian columns of Mondragone marble and the suffused light inside the basilica illuminates some magnificent works of art, such as the main altar embellished with lapis lazuli and precious stones and eight statues of saints along the walls. In the immediate vicinity is the labyrinthine quarter of Pizzofalcone, where a thousand narrow streets intersect one another haphazardly behind San Francesco di Paola.