Home Art Churches Cloistered monasteries in Naples. Prayers with a view of Eden 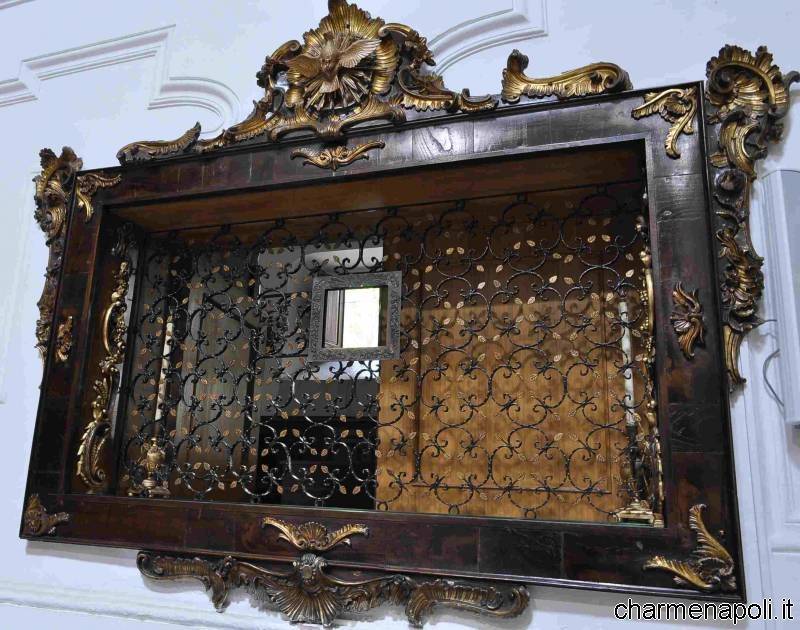 Naples is brimming with convents and monasteries, residences of monks, cardinals, friars, priests and nuns. In 1294, following Charles of Anjou, pope Celestino V transferred the papacy to the city. The city was also the home of saints like Giuseppe Moscati and Alfonso Maria dei Ligouri, venerated throughout the world. Over the centuries, members of Holy Orders were one of the key elements in the capital of the Kingdom of Two Sicilies. It was a city that merchants and navigators noted for the number of spires, belltowers and domes which came into view when arriving by sea.

Naples embraced the faith from the first steps of Christianinty, as testified by the love and devotion of the Neapolitans for their patron, Saint Gennaro, bishop of Benevento martyred by the Romans at Pozzuoli in 305 AD. Naples was also the place of refuge for the nuns of St. Basil, escaping from the iconoclast war in Constantinople. It is also here that the “meaning” and the craftsmanship of the crib was established, a “made in Naples” symbol of the Nativity.[charme-gallery]

The sacred is expressed and exalted in the hundreds of cloisters and churches built by kings, princes and monastic orders to venerate Our Lord, but also to adorn the city and to offer hospitality to pilgrims. They are places chosen by the servants of God for contemplation and for refuge from the world. Meeting places of religion and the faithful, but also boundaries between the isolation of the clergy and the world of laymen. Abandoning their original role, many of these, are now visited by tourists and the faithful, attracted by the fascination of a city where the historical centre is a UNESCO World Heritage site, because of the wealth and rarity offered by its architectural treasures. Among them, the monastery of Santa Chiara.

This fortress of the Francescan friars lies between Spaccanapoli and Piazza del Gesù, containing illustrious tombs and canopied mausoleums reserved for the eternal rest of the Angevin kings. Under the Gothic nave and aisles one may still admire the precious remnants of frescoes by Giotto and the notable sculptures in the chapels of the Neapolitan nobility. The most remarkable part, however, is the 18th century majolica tiled cloister, a complex of three courtyards, a transposition of celestial Eden to Earth, with a shining gallery of ceramic tiles illustrating bucolic scenes, the work of the sculptor Domenico Vaccaro. The cloister is entered from the Museo dell’Opera, where there is the Archaeology Hall containing finds from excavations of the complex.[charme-gallery]

A lesser monastery is the Trentatré (Thirty-three), near the Policlinico Vecchio, which was only recently opened to the public, for a few days only during the Maggio dei Monumenti 2013. The name of the complex comes from the maximum number of nuns it could accomodate (its real name is Santa Maria di Gerusalemme). The 13 nuns who live here now still communicate with the outside using the same revolving door as the original building, constructed thanks to the Catalan noblewoman Maria Longo. In the Trentatré are noteworthy frescoes of Santa Chiara and Sant’Antonio with the Virgin, the Supper at Emmaus by Giuseppe Bonito and the Presentation of Jesus in the Temple by Theodoro d’Errico. The annexed 17th century church by the architect Giovan Giacomo di Conforto, the refectory and the cloister, are also extraordinary

The hermitage built, starting from 1585, on the Camaldoli hill is also a monastery, dedicated to SS. Salvatore, and has a remarkable view over the whole of Naples and the Sorrento peninsula. For 400 years, before passing to the nuns of Santa Brigida, the hermitage, by the architect Domenico Fontana, was inhabited by monks of the Camaldoli ascetic order founded by San Romualdo. Inside the building are paintings and frescoes by 17th century artists like Luca Giordano, Massimo Stanzione, Andrea Mozzilli and Federico Barocci. The hermitage can offer pilgrims hospitality and rest in a climate of serenity and peace thanks to the completely restored cells and gardens.[charme-gallery]

Another famous monastery, rising in the heart of the Decumani of the historical centre is dedicated to San Gregorio Armeno. The church is also known as San Patrizia because it holds the saint’s relics. It has a noteworthy cloister with a Baroque marble fountain at the centre, flanked by 17th century statues of Christ and the Samaritan, by Matteo Bottiglieri. Tradition has the complex founded in the 6th century on a temple of Ceres by a group of nuns of St Basil, refugees from Constantinople.

Another place of worship rises in Arco Mirelli, the complex of San Francesco degli Scarioni, inaugurated in 1721 and built at the behest of the heirless Tuscan merchant Leonardo Scarioni. The Baroque façade has a wooden statue of San Francesco.