Home Art The Pharmacy of Wonders 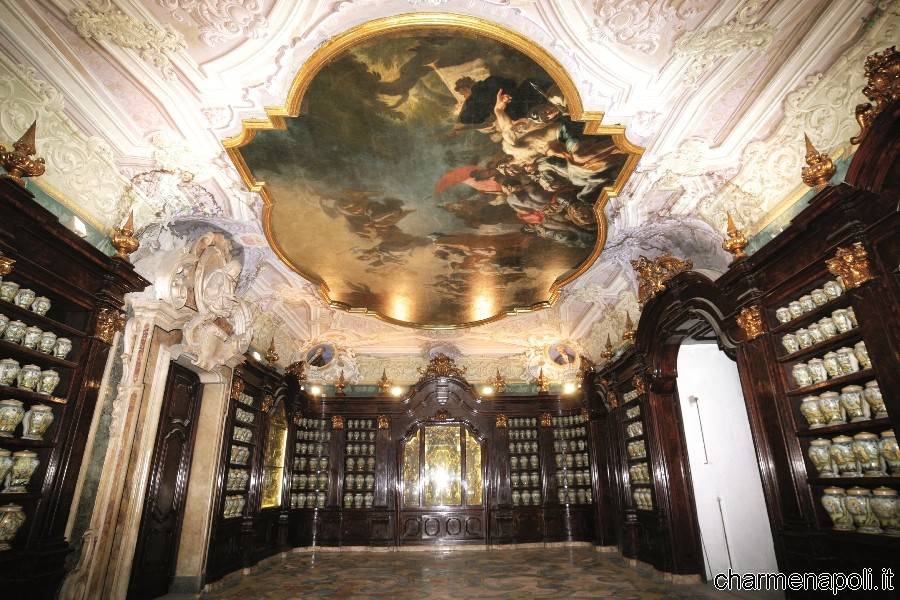 The Incurabili hospital is a baroque-rococo masterpiece once frequented by eminent figures from the history of medicine in Naples, and its superb Pharmacy, the Medical Garden, the Montalto Chapel, the Musuem of Sanitary Arts and the Cloister of Santa Maria delle Grazie are now a ‘must’ for anyone discovering the heart of Naples. Built in the 1520s by the charitable Catalan noblewoman Maria Longo, the Incurabili was intended for sufferers of syphilis, a disease that spread to Italy following the discovery of America and reached Naples in 1494 when the armies of Charles VIII invaded the city. Today the Royal Hospital’s unusual yet delightful artistic heritage reflects the splendour of its glorious past. [charme-gallery]The elegant piperno courtyard and 16th century wards lead into the Museum’s two exhibition halls, named after patrons of the Neapolitan medical school: Domenico Cotugno and Domenico Cirillo, where, over 100 exhibits are on show in nine display cases around the majestic 16th century staircase. The 18th century Pharmacy is an acclaimed masterpiece of Neapolitan medical science from the Age of Enlightenment, where the layout of the rooms reveals a rigorous control of space with flashes of colour in the majolica tiles and vases and the gilded furniture and carvings. The famed Neapolitan sculptor, architect and painter Domenico Antonio Vaccaro designed the New Workshop in 1729 with a superb double staircase leading visitors to the Loggia with its exquisitely embellished marble portals. [charme-gallery]The furniture, woodwork, marbles, gilt carvings and majolicas of the Pharmacy were made by skilled Neapolitan craftsmen, and many of the jars still bear the original label indicating their contents. One large marble vase once contained Theriac, a panacea widely used in the Middle Ages and the Renaissance named from the Greek theriaké, meaning “remedy for the bites of poisonous animals”. Its ingredients included opium, and snake flesh and skin, but the alchemical traditions of Naples did not diminish the great scientific value of the Pharmacy which, today, is part of an itinerary taking in the ancient city streets of Via Tribunali and Spaccanapoli.