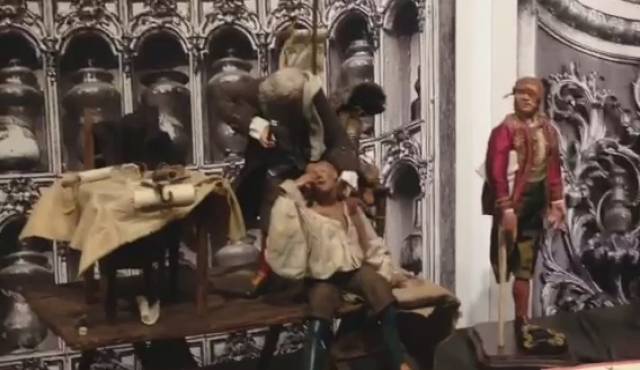 Is a call ironic, but no less profound and careful reflection to an unusual Neapolitan crib set up in the Museum of Arts Health at the Hospital of the Incurable in Naples. The idea of Professor Gennaro Rispoli, founder of the Museum and dominus Association “The Lighthouse of Hippocrates” is to offer visitors a broader view of reality described in the representations Neapolitan crib born in the ‘700. A vision that includes the suffering people and results in statuettes that exemplify some of the most serious diseases of the past. So instead of showing scenes of taverns and traditional crafts, the representation of the Nativity of the Museum of Arts Health of Naples offers a roundup of women and men who suffer, not without a hint of irony Neapolitan.

The unusual exhibition opened yesterday afternoon in the gallery space located in the courtyard of the sixteenth Incurabili hospital founded by Venerable Maria Lorenza Longo in 1522. The only hospital in Naples that for about half a century has never stopped its healthcare activities and which remains a remarkable example of artistic expression with restored Pharmacy of ‘700. The inauguration was followed by a concert of the choir Vox Nova in the refectory of the Clarisse Cappuccine, an order founded by Maria Longo. One way to celebrate this Christmas with all the doctors of the Incurable. Among the guests the general manager of ASL Napoli 1, Ernesto Esposito.

Entitled “Incurable pastors and healers quacks”, the exhibition features 14 statuettes. Many are single pieces, three scenes with multiple subjects. There is that, terrible, representing the victims of the plague (signed by Scarabattola from Scuotto brothers). Particularly that of the “pulling teeth” (from the collection of Professor Fernando Gombos) that plays a charlatan in the act of pulling a tooth in a patient under the gaze of a little monkey (which was used in the ‘600 to attract customers). Then there is the representation of a small kiosk where monks and alchemists expose flasks with spices for sale to the sick. Statuettes represent each individual one or more diseases. There is the man who has suffered the amputation of a limb, who has goitre, hernia, who is blind, who obese. And there are the shepherds deformed best known: the dwarf and the hunchback (“or scartellato” in Neapolitan language), the figures related to the sphere of the superstitions and considered a good omen.

The subjects come from private collections of Roberto Caruso, Professor Gombos, Stefania Matera and the same director of the Museum of Arts Health, Gennaro Rispoli. In his words the spirit of this initiative: “Show evil or sores shamelessly equates to exorcise it, so as these shepherds are an opportunity for reflection on the epidemiology and the ills of the past centuries. This is also part of the survey historical-medical Museum. “An intent that goes beyond it aims to “show even those curious figures healers representing the birth of the health professions”.[charme-gallery]