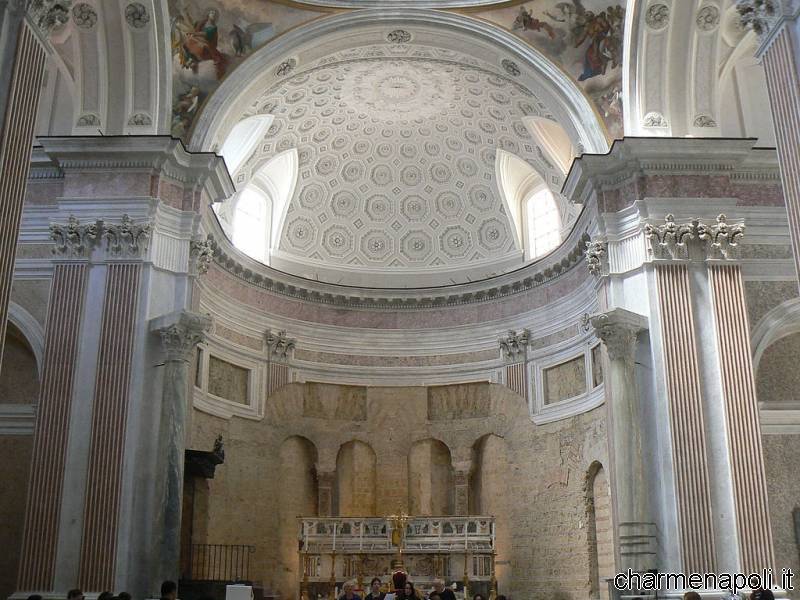 Naples, historical Center. The sun is just lowered. The lights of the aisles are as always soffuse and mystically winding. Celestial musics, modern and ancient they play again. In the Basilica of St. Giovanni Maggiore. The May of the Monuments 2013 propose the coupled imperdibile of history and music to visit more one of the you trouble churches in Naples. Styles and music of different kind, from Jobim to Mozart, from Haydin Bach and Wagner to the Choristers of Posillipo and up to Gershwin. A windmill of styles as those that have crossed the boundaries of this that it is among the most important Neapolitans churches, but for well four times struck by earthquakes.[charme-gallery]

The legend wants it built for wanting of Costantino as place of cult to the open one as thanks for the salvation of his daughter Constanza escaped to a shipwreck. Its foundation, seems happened on the bases of a preexisting pagan (perhaps devoted to Ercole) temple, it is defined in the year 324. It was restructured only almost entirely two centuries later, after Norman rehashes and Angioini, and even more it was turned into Six hundred to work of Dionisio Lazzari, since strongly damaged by the earthquake of the 1635. The Baroque  and those eighteenth-century transformations have not almost left anything of the native temple. Other two earthquakes (in 1732 and in the 1805) they forced to further restructurings. And still another cataclysm (that of the 1870) it brutally hurt the boundaries of the church, particularly the right aisle, and the dome collapsed. To that point it risked to be dejected, but the tenacious opposition of the canonic Joseph Perrella (in his honor a headstone in the right aisle) made the jobs of restructuring depart in neoclassic style.

One century later, in 1970, the church was closed for well 42 years because of a yielding of the time. The slow restauration brought to the light however, in 1978, the apse paleocristiana below the wooden choir of the XVII. In January of 2012 the basilica has been reopened thanks also to the intervention of the order of the Engineers of the Province of Naples.[charme-gallery]

Here following the program of the programm of the concerts from May of the Monuments in the Basilica of St. Giovanni Maggiore (musical manager M°Luigi Grima)

The collection will be devolved in beneficence

From Ellington to Gershwin passing for Porter and Carmichael. A trip in the melody of the great authors, from “Summertime” to “Don’t Get Around Much Anymore”, from “Night And Day” to “The Man The Love.”

Seminar and concert edited by David Ryan and Gianni Trovalusci

Seminar and concert edited by David Ryan and Gianni Trovalusci

“To Theater With Giving”

Beatrice is the strength of the love that calls to the happiness, not only in to rejoin him with the beloved person, but especially in to find again his/her own fullness.

Presentation of the teacher Patrizia Zenga, where the words of the Top Poet they take voice and form in actress Federica Aiello’s voice, accompanied by the visual suggestions of the imma­ginis of Francesco Landi.

Students of the Conservatory “D.Cimarosa” of Avellino directed by Eugene Ottieri

Box-office: a hour before the beginning of concerts – Basilica St. Giovanni Maggiore

Prices of the concerts:

Free entry for the under 18