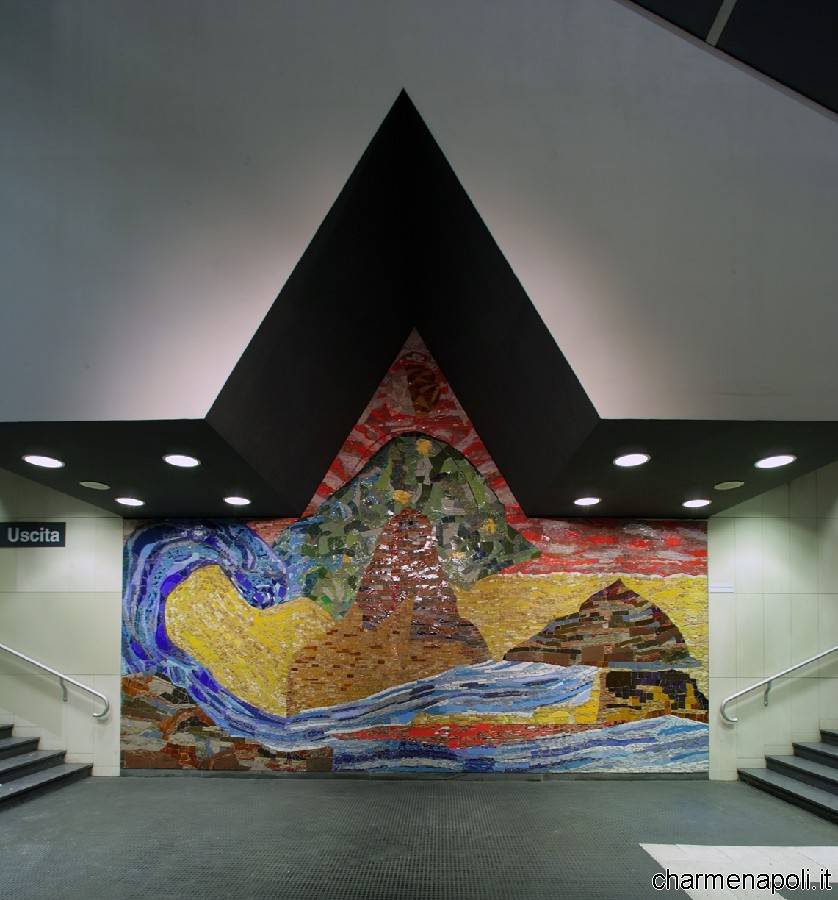 The rhythmic echoing of leather shoes, designer trainers and high heels mark the passing of time from early morning until early evening as the metrocommuters make their way up and down the corridors of the stations along the Naples underground railway Metro Line 1. There are many stops as the line winds its way up from the bustling city centre to the residential areas on the hillside, but seven of them have been designated “art stations” and are not only points of transit between home and work, but places of cult and culture. The first of these is Dante, the station serving the colourful and busy square of the same name that has been redesigned by the architect Gae Aulenti. [charme-gallery]The corridors leading to the platforms are hung with oil paintings by Carlo Alfano, a mosaic by Nicola de Maria, the metaphor of Kounellis, the mirrors of Pistoletto and the lines from the Divine Comedy in work of Joseph Kosuth beneath neon lights. The nest stop is Museo, for Piazza Cavour and theNationalMuseumwhich is highlighted by a reproduction of the Farnese Hercules and the original Carafa head, as well as a permanent exhibition of archaeological relics found during the construction of the railway. There is just time to admire the photos taken by local people, such as the one showing the devastation of the 1980 earthquake, before climbing aboard the train. [charme-gallery]After Materdei is the exquisite Salvator Rosa station, whose modern entrance is paved with marble and has arch-shaped, stained-glass windows beneath a tall spire Around the station are gardens with the remains of a Roman bridge and a 19th century chapel as well as the “playground” with sculptures by Mimmo and Salvatore Paladino, Barisani, Dalisi, Longobardi, Mocika and Perez, and mosaics by Ugo Marano. The Vanvitelli station is served by a large staircase with a luminous spiral work by Mario Merz representing Fibonacci sequences. [charme-gallery]Where the corridor branches into two, is a wall decorated with fantastic figures of Prehistoric animals and, just before the platforms, two large coloured mosaics by Isabelle Ducroit as well as photos by Gabriele Basilico and Olivio Barbieri. The Quattro Giornate station is an art museum celebrating the Four Days of resistance against the German army following the landing of allied troops atSalerno, with works and images by Nino Longobardi, Umberto Manzo, Anna Sargenti, Baldo Diodato, Maurizio Cannavacciuolo and Betty Bee. The last of the “art stations” is Rione Alto. An anthem to modernity, it has a 120 metrelong corridor lined with coloured panels , images and sequences of faces and figures and, on the outside,a fountain and mosaic.