Home Art Art and history guide passengers to the trains 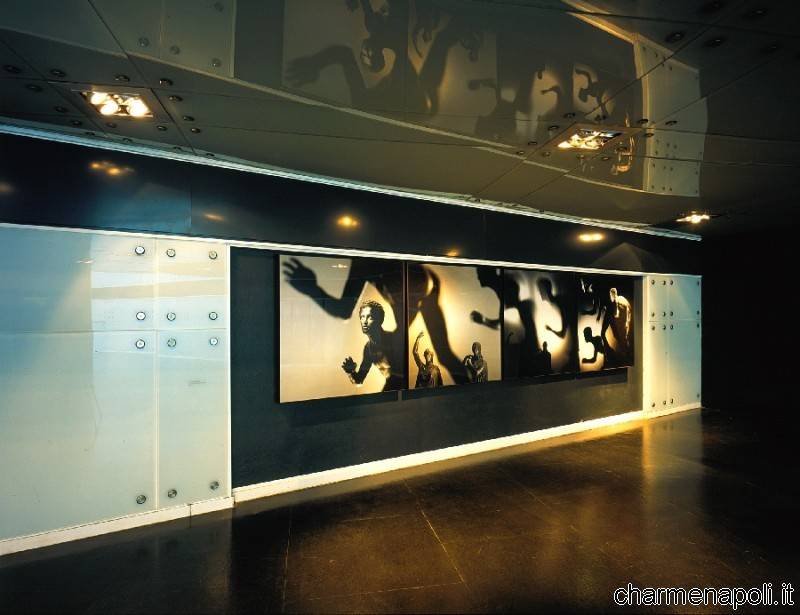 The bright, spacious and futuristic stations of the Naples subway are veritable museums exhibiting art works to travellers as they head to their trains or come back to the surface already embraced by the cultural atmosphere that only Naplescan offer. Some depict angelic figures of womanhood, like  Karim Rashid’s Beatrice in the Università station or battles from recent Neapolitan history, such as Marisa Albanese’s Combattenti in Quattro Giornate, while others evoke literary figures like Pasolini in Materdei or the Greek agora with electric blue neon lights in Vanvitelli. By 2015 there will be fifteen ‘art stations’ embellished with paintings, sculptures, mosaics and photos by eminent artists like Jannis Kounellis, Joseph Kosuth, Mimmo Paladino, Sol Lewitt, Enzo Cucchi, Mario Merz, Renato Barisani and Mimmo Rotella. Over 180 works by 90 prestigious contemporary artists make the Neapolitan subway an exciting example of an ‘open’ museum exhibiting works of art and historic artefacts found during construction. The stations themselves are designed by world-renowned architects to enhance the surrounding urban fabric – the project’s underlying philosophy. Nine of the sixteen stations on Line 1 and the four new stations on Line 6 are denominated ‘Art Stations’. Salvator Rosa, designed by Atelier Mendini, has entrances marked by colourful glass and steel spires and art works complementing the adjacent Roman bridge and neoclassical chapel with mosaics and murals on the sides of buildings. Materdei is also Atelier Mendini’s work: the neighbourhood has been closed to traffic and enhanced with gardens ‘populated’ by fantastic creatures. Gae Aulenti’s design for Dante station requalified the surrounding square while preserving its 18th century layout, with a lava stone pavement on Luigi Vanvitelli’s original design and glass access points to ensure visibility of the square’s historic hemicycle. Domenico Orlacchio’s Quattro Giornate station achieves continuity between the many artworks housed inside the station and the bronze statues of athletes in the gardens dotted with long benches and wooden tables. [charme-gallery]Lala station on Line 6 was designed by Uberto Siola to respect the circular layout of the piazza with works by Castella, Campigotto and Dago as well as an installation by Nanni Balestrini. Mostra near the San Paolo stadium andNaplesUniversityhouses superb photographs by Gabriele Basilico highlighting the architectural lines of the nearby exhibition centre, three mosaics by Costantino Buccolieri, works by Merz and Sironi and Gianni Pisani’s “Monument to G. P.”. Designed by Gae Aulenti, Museo near Piazza Cavour is a concrete, glass and steel pavilion painted Pompeiian red and housing copies from theNaplesArchaeologicalMuseumlike the Farnese Hercules and photographs by Mimmo Jodice. Augusto exhibits the works of Bruno, Scognamiglio and Crespo along with ceramic reliefs, a series of light boxes dedicated to Galileo Galilei and an installation by Botto&Bruno expressing youth unease and social problems in the city suburbs. Università in Piazza Bovio captures the attention of commuters with colourful panels, sculptures by Rashid such as Synapsi inspired by neural networks, and two black columns called conversational profile, which depict the author himself.Images ofDante and Beatrice line the platform steps. The Via Semmola exit of Rione Alto is embellished with installations by Antonio Tammaro, Achille Cevoli and other artists. Inside there are panels by Giuseppe Zevola, photographic prints by Katharina Sieverding and two light boxes by Bianco&Valente on the ceiling of the tunnels. Studio Protec’s Mergellina station has a main hall designed by Vittorio Magnago Lampugnani and walls decorated with mosaics by Gerhard Merz. The access gates were made by Alan Fletcher who combined the words “Mergellina” and “Metropolitana” in a carving on the steel railings.[charme-gallery] The latest addition to the ‘Art Stations’ isToledoin the heart of the city, designed by Catalan architect Oscar Tousquet Blanca with interiors decorated by William Kendridge, Bob Wilson and Achille Cevoli. It is the starting point for the Metro Art Tour, offered free of charge to tourists, with five floors whose colours mark the passage from the land to the sea and a spectacular crater linking the surface to the main hall 40 metres below. A large panel by South African artist William Kentridge depicting Neapolitan and mythological figures welcomes visitors at the entrance. The remains of the Aragonese defences have been restored and incorporated into the station, and the mould of a Neolithic ploughed field from 4000 BC discovered during the excavations is exhibited at Museo station. Bob Wilson’s light boxes depict wave motions and Achille Cevoli’s photographic installation illustrates the subway construction site and tunnels. By summer 2013 Garibaldi station will complete the subway link between Piscinola and the Central railway station, although the intermediate stops of Municipio and Duomo will not yet open as Massimiliano Fuksas’s project has had to be modified after the finding of a Roman temple. The latter will be incorporated into the design of Duomo station opening in 2015. The long awaited Municipio station designed by Portuguese architect Alvaro Siza is expected to open in 2014, while the Capodichino station conceived by Richard Rogers in glass and steel will be ready within five years. Meanwhile the European Commission has given final approval for the completion of Line 6 between Municipio and Mostra with an investment of 173 million Euros.