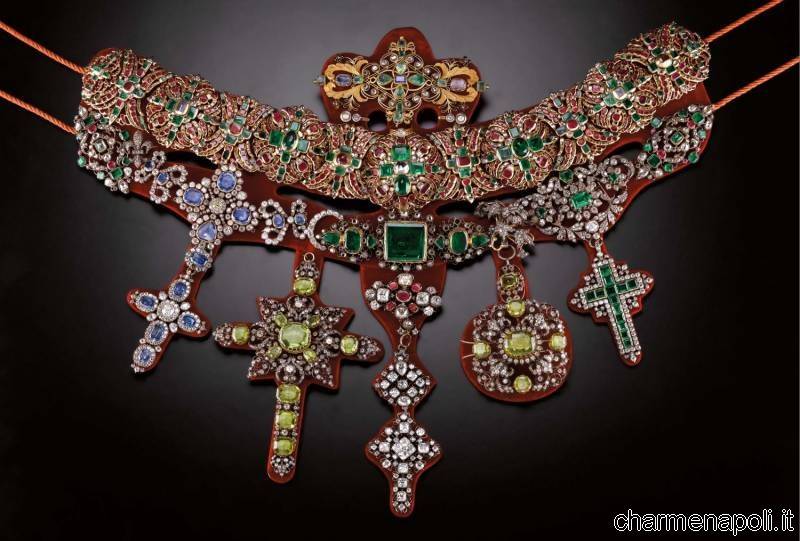 Emeralds, rubies and diamonds. But aslo old documents , embroidery , paintings. A place overflowing with joys, jewelry , necklaces and pearls all religious handicraft works on permanent display at the Museum of the Treasure of San Gennaro. A museum a short walk from Naples Cathedral filled with the proceeds of seven centuries of Christian donations . Seven centuries , seven hundred years of votive gifts and presents made by thousands of faithful who form a treasure greater than that of the Crown of England.

Welcome to the Museum of the Treasure of San Gennaro, the only building on the face of the earth in which are preserved extraordinary works of human genius : chalices, miter , busts , necklaces , crucifixes, carvings . ” Spare ” superior , both in quantity and in quality ( according to some ) even treasure of England and that of the Tsar of Russia. A rich collection , composed of masterpieces , all of incalculable value , dedicated to the worship of the patron saint of Naples.[charme-gallery]

History shows that in the centuries of the Middle Ages, it was the poet Virgil, who turned the Neapolitans to obtain grace , protection and supernatural interventions . Gennaro , bishop of Benevento beheaded at Pozzuoli during the persecutions of the Emperor Diocletian , in those years, was barely known. His body was buried in the catacombs of Capodimonte, was entrusted to the veneration of a few frightened Christians. Subsequently, with the passing of years and the roots of Christianity , the reputation of the Holy Bishop began to spread out of the darkness , soon , in every corner of the capital.

Gennaro was moved to the Cathedral of Naples at the end of the sixteenth century, by which time his cult had already taken hold in the city , coming to unseat , albeit slowly , pagan rituals associated with the cantor of the Aeneid .

It was Charles II of Anjou to dispose of, first , it was a bust made of gold and silver made to contain the bones of the head of the saint. It was another heir of the house of Anjou, Roberto to want a special display case , made of silver, in which to store the cruets with Gennaro ‘s blood , the blood that miraculously liquefies three times a year . Two valuable works that marked , in fact , the core of the extraordinary first-born baby, gone, gradually enriched , over the centuries , with hundreds and hundreds of donations of kings , popes, squires , men of renown , pilgrims and common people.[charme-gallery]

Thousands and thousands of gifts at first kept in the Royal Chapel , but once grown excessively , transferred to a special building – museum housed right next to the Duomo , where today are exposed to the devotion of the faithful and curiosity of tourists.

An immense treasure , then. Living testimony of faith in the saint of all the Neapolitans. A must see together with the nearby Royal Chapel , to not get lost, for example, the glittering spectacle of the cup in gold handmade in San Gennaro donated by Pope Pius IX, in exile in Naples (guest of King Ferdinand ) in 1849 , during the motions of Mazzini and the fabulous machine gun for the bust , made of gold and silver and golden studded with thousands of precious stones , a gift of the Deputation , and of the people of King Charles III of Bourbon in San Gennaro . Just a taste of the incredible wealth that comes with the holiest and most precious of all treasures .

Museum of the Treasure of San Gennaro