Home Culture Traditions Race of the Angel and Actus Tragicus, tradition in the service of... 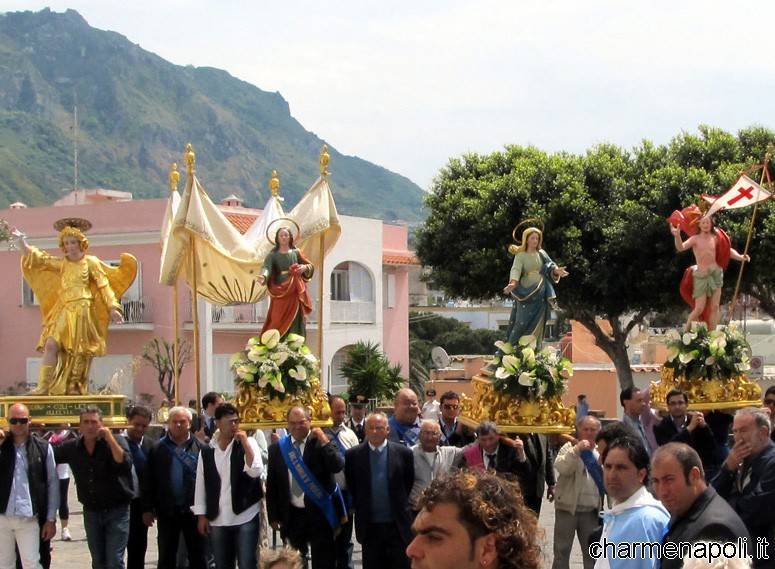 Tradition in the service of the faith. It happens in Forio d’Ischia, one of the six municipalities of the Green Island, in the days of the Easter holidays. A solemn moment, that involves the entire community. And that culminates on Easter Sunday, in the characteristic “Rice of the Angel“, the sacred representation organized by the ancient Confraternity of Santa Maria Visitapoveri, to celebrate the moment of the Madonna and son risen. Four protagonists of the ritual (which is known since 1618)  that unfolds in the form of a procession, along the main street of the village: Jesus, the Virgin, St. Giovanni and the Angel, portrayed in four wooden statues (the first were carved by an artisan of Naples between 1756 and 1757; that of the Angel, covered with pure gold, is the work of Vincenzo Mollica) carried on the shoulders through the streets of the country, always by the same families for a law not written that has been handed down from father to son. The “Rice of the Angel” recalls the Gospel text in which the risen Christ sends his angel to bring the message to the Mother and this, together with Giovanni, went to the tomb. The representation, very characteristic and suggestive, it is preceded by another rite relatively more recent, but no less touching and later called “Actus Tragicus”. Is a real tragedy sacred itinerant dedicated to the passion and death of Christ, made by the Actus Tragicus Association and sponsored by the Municipality of Forio, and come this year to its 27th edition. A Way of the Cross, which takes place in period costumes followed every year by thousands of people. The Actus ends with the crucifixion of Jesus and the two thieves on the church square of the Rescue. The date for the 2015 edition of the actus is for Friday, April 3, starting at 7:30 pm.