The Graziani RELAIS  B&B is conveniently located in the historical center of Naples, on Piazza Dante among the most important in the city, in the house publisher Joseph Graziani, the third generation of an ancient family of printers, engravers and publishers in Naples in 1920.

The  Graziani RELAIS  B&B  is located on the second floor of a historic building of 1600 right on the Square? Dante west of the statue of Dante. It is an elegant and warm alternative to a small luxury hotel, with its ancient and original style, edited by Graziani family to their home. Its  rooms  panoramic, luxurious, comfortable and have their own bathroom with all comforts to give their guests the pleasure of feeling “Neapolitans DOC” for the time of their stay in the city.

The Graziani RELAIS B&B is located in the heart of the  OLD CENTER of  Naples , in Piazza Dante at the entrance of “DECUMANI” in Naples first Greek and then Roman, declared by ‘ UNESCO  World Heritage Site. The Historic Center of Naples, after Rome is the ” museum largest open pit in the world “.

From Graziani RELAIS B&B, on foot, you can reach everything there is to see in town. A few meters from us are  the Monastery of Santa Chiara with its beautiful cloister, Piazza del Gesù  and  Piazza San Domenico Maggiore,  Piazza Bellini, the famous street of the Booksellers in Via Port’Alba ,  the Duomo  (where 19 September and the first Sunday in May liquefies the  blood of San Gennaro), the Church of San Domenico Maggiore  where the remains of the first Aragonese king of Naples and the  Via San Gregorio Armeno with the old shops of pastorai teachers and the  museum complex of San Lorenzo Maggiore which it gives access to the excavations of the greek-Roman period, Spaccanapoli  , and  the Chapel of San Severo  with  the Veiled Christ by Sammartino ,  the Picture Gallery Pio Monte di Misericordia  where you saved the seventeenth century painting  “The seven works of Mercy”  by  Michelangelo from Caravaggio. Just 500 meters there’s the  Piazza Plebiscito  with the  San Carlo Theater , the Royal Palace,  the Maschio Angioino  and the  “Borgo Marinari”  with  Castel dell’Ovo.

Also again via Garibaldi train station can reach the  Royal Palace  with its beautiful gardens, the  Campi Flegrei, where you can visit the City by the Bay for sea flooded the phenomenon of bradyseism, the Temple of Serapis , the Solfatara Volcano  still active, the Piscina Mirabilis , the cave of the  Sibyl Cumana short, everything old is almost three thousand years, which has given rise to the mythological city of Naples. And yes, because Napoli is three thousand years old and in it are stratified various periods from its foundation to the present, and you can not hold on a page of a website across your History. Before leaving, do not forget to book the trek on the  “Path of the Gods”  (stroll on a path to having your feet the  Amalfi Coast ) or, for lazy people, a trip on  Vesuvius  with breathtaking views of Naples and Pompeii. We remind all our guests who can also be booked at our guided tours of the structure, to the islands and for the Sorrento coast, for all the monuments and churches with specialized guides, courteous and qualified, we propose thematic itineraries of the city of Naples.

The building of 1600 where the town Graziani Relais B&B is among the oldest in the Piazza, as you can see from the picture of the painter Micco Spadaro of 1650, and can be visited in the Museum of Capodimonte, and was bought by Arch. Ferdinando Sanfelice in 1715 under which building the son Arch. Cosimo had built the Prisons of Sanfelice (from which the name of the street) which were used to imprison malefactors of the time they became guilty on the outskirts of Naples.

The rich Lord Duke Ferdinando Sanfelice wanted to buy all the small shops around the building, then deposits worthless, to accommodate the artisans and merchants of the center, as well as redesigning the place, initially muddy and unhealthy, in a small village of great dignity, that opened the gates of Old Naples, and make it a true forerunner mall. Ben three centuries later, in 2011, the current occupant of the building, Giuseppe Graziani , the magic of fate opens the doors of their homes to tourists and visiting guests in the heart of Naples, and founded and chairs the Nature Center “Borgo Dante & Decumani “ , composed of 200 other activities between Piazza Dante and the Cathedral of Naples, now being reorganized for the revival of Cultural Tourism in Naples. – “When we say that everything is back !!!” 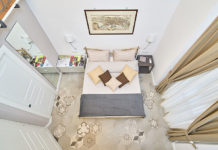 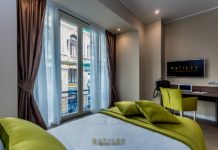 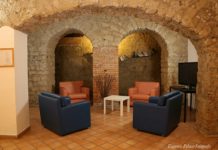 Visit Santa Maria La Nova to discover the mystery of the...