Home Events Excavations of Pompeii and Herculaneum still open until October 1 on Saturday... 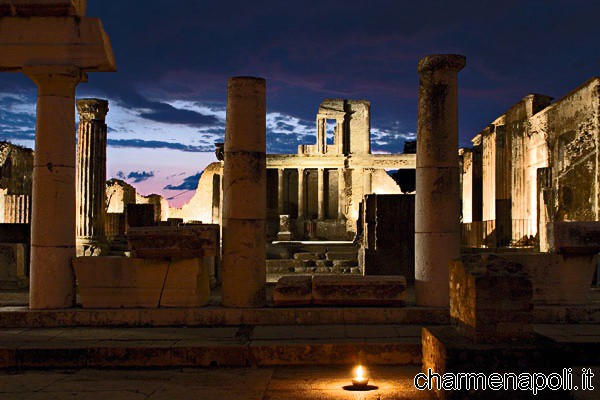 Experience history under the stars. Emotions are not allowed at all but that certainly will experience all those visitors who decide to discover Pompeii and Herculaneum in the moonlight, and for the next five Saturdays and until 1 October this year. Let’s see what he arranged for them the Superintendency of Pompeii for such occasions as reported on their website pompeiisites.org.

“The paths to the Pompeii ruins, will enrich the Antiquarium visit, building constructed in 800 and now re-opened after 36 years. The visitor will be immersed in a fascinating journey into the history of Pompei, from its origins to the daily life of up to 79 A.D. through spectacular multimedia projections and a plastic reconstruction of the ancient city “photographed” at the time of the eruption, with virtual reality applications through mapped projections illustrate the most relevant physical locations of the city. In Sacred museum section dedicated to Pompeian houses of worship of pre-Roman Pompeii, you can, however, admire finds from urban sanctuaries (Doric Temple and the Temple of Apollo) and suburban (Sanctuary of Iozzino Fund and Sanctuary of Sant ‘Abbondio). From Viale delle Ginestre it then logs on to the portico and the Theatre district, where you will witness nightly multimedia installations that tell of the struggles of gladiators and carry the viewer into the atmosphere of the performance at the Teatro Grande and all’Odeion. Admission: only Saturday, September 3 from Porta Marina Piccola, while in the other dates from Piazza Esedra. Ticket closing hours 22:00

The ruins of Herculaneum can be visited with the support of the Vesuvian archaeological Group, who will accompany the visitor to the discovery of the remains preserved in the Pavilion of the boat, where it is exposed to the boat found on the beach of the ancient Herculaneum. From here you will reach the area of Fornici, unlucky shelter for about 300 fugitives and from where you can see the line of the ancient coast. The tour ends on the terrace of Nonio Balbo, a privileged time overlooking the sea. The entrance will be allowed from 20:10 hours through the opening of Corso Resina, to a maximum of 300 visitors. The ticket office will close at 22.00. The visits will be arranged for groups. The City of Herculaneum will make available two parking areas accessible from Via IV Novembre. “