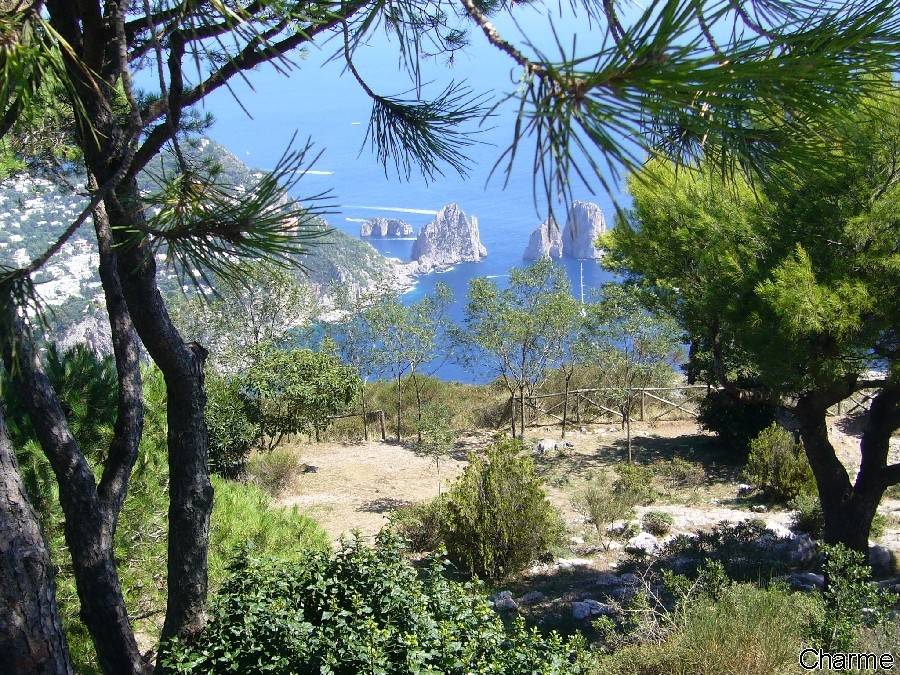 Capri, the pearl of theMediterranean, captures the heart and mind of visitors as soon as they set foot on shore. The traditional, whitewashed buildings and shops lure you into the maze of narrow streets and alleys, while the superb views offering every nuance of blue from azure to ultramarine invite you to explore into the lush vegetation. Then you can go for a refreshing drink in the famous Piazzetta and rub shoulders with the rich and famous before a spot of exclusive shopping along Via Camerelle. However, the view that you’ll remember forever is the sight from the top ofMountSolaro, a natural terrace at an altitude of nearly 2000 feet which can be reached from Anacapri.[charme-gallery]

The road fromCaprito Anacapri winds through vineyards and lemon groves and passes by the villa of Axel Munte, the eclectic Swedish physician and collector, but the climb to the top of the mountain is facilitated by a 12 min. Bute ride on a chair lift if you don’t feel up to the challenging walk along Via San Michele. However you get there, you will find it was well worth the effort: a breathtaking panorama taking in Anacapri, long white cliffs towering over tiny coves and bays and leading the eye to the town ofCapriwith its beaches at Marina Piccola and the Faraglioni stacks at Punta Tragara, the symbol of the Azure Isle.[charme-gallery]

Peeping out from the rich vegetation are numerous villas, including Villa Jovis, the only survivor of the reputed 12 villas that the Emperor Tiberius had built on the island. Slightly to the left is Punta del Capo, the headland that stretches out as if to embrace Punta Campanella on the mainland, and beyond that the tiny islands of Li Galli named after Ligeia, one of the Sirens who decided to kill herself along with Leucosia and Parthenope when they failed to enchant Odysseus.

Dominating the view of the Gulfs of Naples andSalernois the everpresent Mount Vesuvius, while to the left are the other two Neapolitan islands: Procida eIschia. The best time to admire the view is at dawn or sunset and you will leave the island with a memory that only thePearlof theMediterraneancan offer.