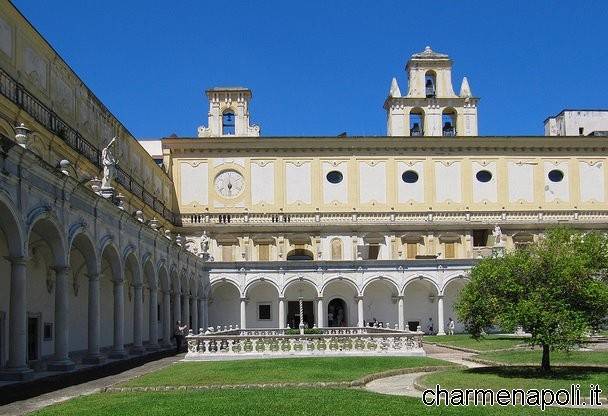 Continue the cycle “The Opera of the month” , edited by Rossana Muzii, an itinerary that “stages”, each month, along the complex path of the Certosa di San Martino, a painting, a sculpture, a work of art or decorative restoration, offering visitors a more comprehensive approach to the artistic heritage housed in the museum area of the Vomero hill.

The second event, scheduled for tomorrow, Saturday, February 15, starting at 11 am, is dedicated this time to the figure of St. Martino in the Certosa di Napoli which was consecrated in 1368, and the factory which alternated some of the greatest artists and architects of the fourteenth century.

The dedication to the holy knight of Tours is not surprising, given the great emphasis that the cult was dedicated to him throughout the Middle Ages. According to tradition , Martino, a soldier of the Roman legion in the French city of Amiens, during a night patrol met a naked beggar and saw him suffering , he cut his cloak in two and shared it with the poor needy.

It is most well-known episode in the life of the saint and undoubtedly the most represented, both in painting and in sculpture , also by several artists who worked for the Carthusians of Naples during a succession of ages.

From here the route proposed for the “Work of the month”. A chance to retrace, in different environments of the museum complex in Naples, the multiple interpretations that have provided various and important artists of the figure of the titular saint of the Charterhouse.

Proceeding in the halls of the Prior will meet the first large wooden panel depicting “St. Martino and the Beggar” of Protasio Crivelli of Milan. Then we will focus on the monumental relief by Pietro Bernini, representing the same episode, with an interesting insight into the reasons of conservation and the means of implementation of the replica that now replaces the entrance portal of the Chartreuse, where it was originally.

Continuing the path you will encounter a unique wooden group, also depicting the episode of the cut of the coat, attributed to Nicola Fumo. The visit will end in the church , in the chapel dedicated to St. Martino in which “Francesco Solimena are the two pictures side with oil in a San Martino is a warrior who gives half of his cloak to a poor man in the other is the appearance of Christ, who shows him the cloak he gave to charity” as told by the Tufari in his famous description of the Charterhouse in 1854.

Certosa and Museum of San Martino
Via Tito Angelini, 22, Naples
tel. +39/081.74.99.111
www.polomusealenapoli.beniculturali.it
e-mail: sspsae-na@beniculturali.it
“The Work of the Month”
The figure for the Certosa di San Martino, from sculpture
Pietro Bernini painting by Francesco Solimena ‘”
Saturday, February 15, 2014 – 11:00 am