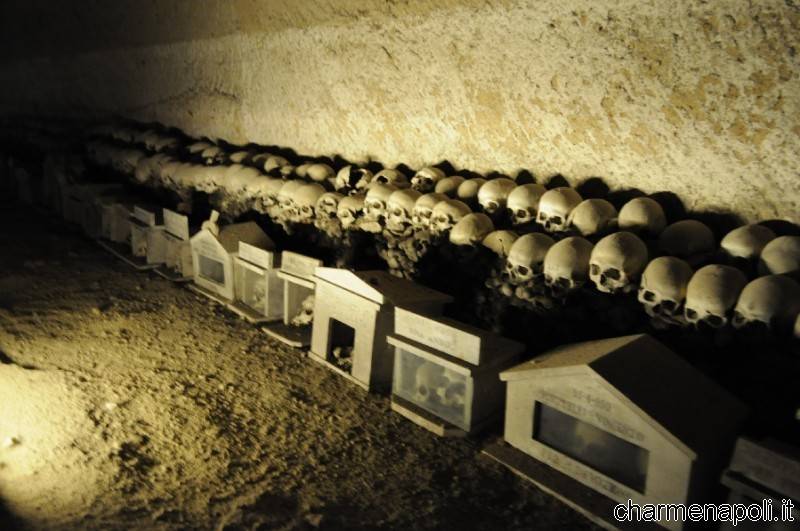 In Naples the sacred and the profane meet. It is a place of myth, magic, prophecy, superstition, ritual and belief, and nowhere is this more evident than in the Fontanelle cemetery, home to the cult of the “penniless souls”. Every day for hundreds of years, Neapolitans have honoured the thousands of bones kept in this tomb dug out of the hillside in the city’s Sanità quarter, now a shrine to which believers flock in order to pray to the penniless souls for a grace or for their protection. [charme-gallery]There are thousands of skulls in the 6000 square meter cemetery, the mortal remains of the men, women and children who died in the 1656 outbreak of plague and were buried here by order of the city authorities. Over the years, other victims of epidemics were buried here in Via Vallone dei Gerolomini and, although they were mostly nameless paupers, here they were transfigured almost into saints, to whom the faithful would pray, telling them their hopes, fears and desires.

The poor from 17th century Naples are thus brought back to life through a well-defined ritual which believers must perform regardless of whether they seek a grace or just an insight into the coming weekend’s lottery numbers. This rite requires the faithful to take one of the many skulls from the ossuary and take care of it, for instance placing it in a box to keep the dust off, stroking it and cleaning it and perhaps giving it a name. [charme-gallery]The “penniless souls” require pampering and protection if they are to help obtain a grace, healing or a win on the lottery. The Fontanelle cemetery was closed following the havoc caused by the 1980 Campania earthquake, but it was reopened in May 2006, although not on a full-time basis. However this hiatus was unable to break the devotion of the faithful and cult of the “penniless souls” continues as strong as ever.

For the May of the Monuments 2013 (clic here to read the whole program of guided visits to Cloisters and Courtyards in Naples), the Cemetery of the Fontanelle is visitable every Thursday of May from the hours 10 am to the 17 pm (by Medeart)

See too Tombs of the Illustrios