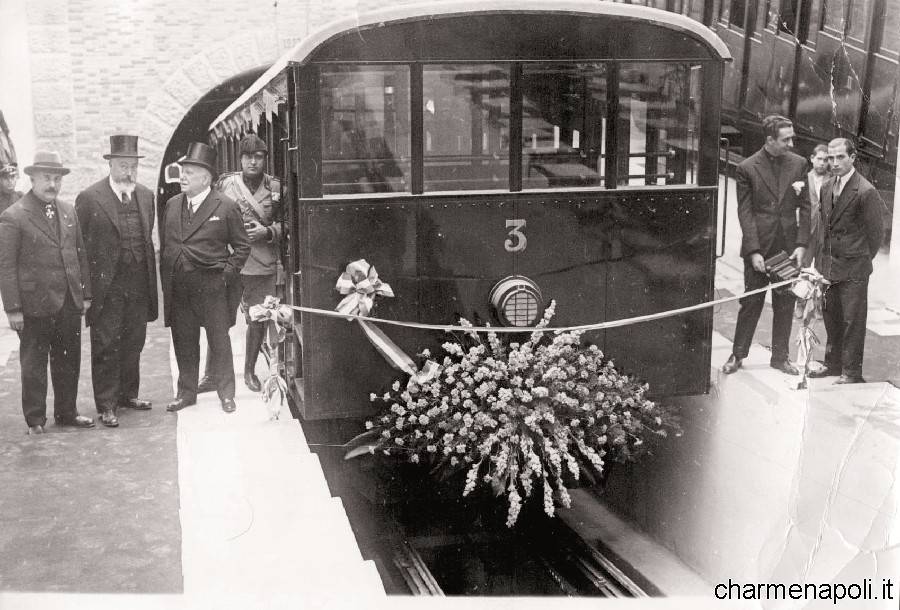 The lush, wooded peak of Mount Faito is a spectacular sight, especially when seen from a cable car. So beautiful was this location that King Ferdinand IV of Bourbon decided to build the royal shipyards at the foot of the mountain, whose name comes from its forests of beech trees (fagus in Latin). Villages and houses are dotted over the mountainside all the way up to the peak of Sant’Angelo and the church of San Michele, built on the site of the reputed sighting of the archangel Michael between the 6th and 7th centuries. A bird’s eye view of this splendid location can be enjoyed from the cable cars covering the 3km between the town of Castellammare and Mount Faito (alt. 1060m) in just 8 minutes. The cableway is celebrating the 60th anniversary of its inauguration on 24 August 1952, since which time it has transported thousands of commuters and tourists and provided them with one of the most breathtaking views of the Gulf of Naples. A similar view was available up until a few decades ago from the Mount Vesuvius funicular railway, inaugurated on 6 June 1880 to take visitors up the steep slopes to the crater. Initially steam powered then electrified in 1904, the funicular was operated by the Thomas Cook Group and was accompanied by a wave of enthusiasm that soon spread thanks to the song “Funiculì funiculà”. In 1906 the railway was buried beneath a deep blanket of ash following a terrible volcanic eruption but it was soon working again as one of the world’s favourite tourist destinations. Cited by numerous tour guides, the funicular was in service up until 1944 when the volcano’s fury destroyed it once and for all. In 1947 a company was set up to build a modern chairlift, which opened in 1953 offering visitors images of rare beauty as they ascended the green slopes of the “mountain of fire”.[charme-gallery] Almost 100,000 passengers a year, over half of them from abroad, admired the fumaroles between the hardened lava ridges and valleys and the postcard view of the Gulf, Capri, Punta Campanella and Posillipo. The chairlift, however, was often closed and many operators preferred to use the new road that had been built up to the crater. In 1984 the chairlift was withdrawn, bringing almost 100 years of “Funiculì funiculà” to an end. All attempts by the Regional Government to restore service since 2002 have been in vain. Naples is one of the few cities in the world to have no less than four funicular railways, which connect the city centre with the hillside quarters of Vomero, Chiaja and Posillipo. The most famous is probably the Funicolare Centrale linking Piazzetta Augusteo with Piazza Fuga and known as the “funicular for shopping” as it joins the two most important shopping districts in Naples: Chiaja and the area around Via Scarlatti and Via Luca Giordano. Chiaja also has one of the oldest electric railways in Italy dating from 1889: the Funicolare di Chiaja runs between the residential areas of the Riviera di Chiaja and Vomero (alt. 500m) in 5 minutes with an average slope of 29%. The Funicolare di Montesanto has the same journey time, linking residential Vomero to the Pignasecca quarter’s shops and markets in the very heart of old Naples since 1891. Finally, the Funicolare di Mergellina, perhaps the most famous of the city’s four cableways, links the elegant quarter of Posillipo with the city centre, Via Caracciolo and the tourist harbour of Mergellina, passing through the private gardens of Neapolitan VIP’s and offering fantastic views. Naples used to have a fifth cableway between Posilippo and the Mostra d’Oltremare exhibition centre in Fuorigrotta. Inaugurated on 9 May 1940, it had two cable cars transporting up to 20 people in 8 minutes but it was withdrawn from service in 1961 when the construction of skyscrapers in the area made it too dangerous. The Mount Solaro chairlift on Capri has had a happier fate, and if the emperor Tiberius had had the benefit of this form of transportation, he wouldn’t have built his majestic palace on the other side of the Azure Isle. From the Anacapri station near the central Piazza Vittoria, 156 chairs take passengers to the island’s highest peak in 12 minutes where they can enjoy the ecstatic view of the Gulf from the cloud-topped Mount Solaro. [charme-gallery]Capri also has an electric funicular railway, which passes through lemon groves to link Marina Grande harbour with the centre of the island in 5 minutes. Built in 1907, passengers landing in the harbour can reach the station in Piazzetta Angelo Ferraro and disembark near the famous ‘Piazzetta’ frequented by the world’s jet set and capture the spectacular views on camera. A similar experience can be enjoyed on the other beautiful island in the Gulf of Naples: Ischia. The Funicolare del Castiglione is a private service operating in a spa complex, whose single car can transport up to 18 clients from the car park to the pools. However, until the 1970s the Green Isle had an important cableway operating between the harbour and the Montagnone belvedere, with open two-person compartments used mainly by tourists. Sadly, the cableway is no longer in service but it was frequently used as a location in films in the 1960s, such as “Vacanze a Ischia” set in the area where, over 2000 years ago, Greek settlers built the first houses of what was to become Magna Graecia.