Home Events The Gay Odin egg, just like the Colossus of Rhodes 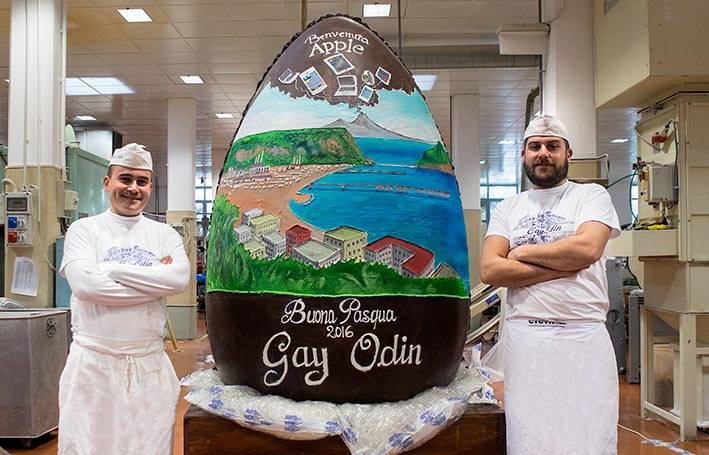 The Managing Director, Tim Cook of the Apple company has recently launched the idea of setting up a one year training-course centre for inventors of apps. Of all countries and cities, this “Giant” has chosen Naples. It is thought that the premises could be the ex-NATO locations in Bagnoli, where the Cupertino Company will erect a highly qualified school which will form young programmers. The school will be open to both Italian and International students. Hopefully this news may prevent many talented young students not to leave the country and work abroad. The city of Naples is going to celebrate this wonderful decision with a spectacular and huge Easter egg made by Gay Odin, the historic Neapolitan chocolate factory, which delights the palates of half of Italy with its delicious creations. The production of this sweet Easter egg is a way to praise the choice of the Apple Company, but it is also the sign that tradition is finally welcoming innovation. Thanks to the creative talent and technical knowledge of the new generations the city of Naples is now focused toward a new future. This is the reason why Charme review, which has always been promoting the excellences of the territory, has decided to choose, as its cover, the picture of this giant Easter Egg. We would like to imagine this egg as a Neapolitan Colossus of Rhodes who can open the doors on to the new world, through the six renovated domus of the Roman Pompeii and through the gushing monumental fountains carved to quench people’s thirst.