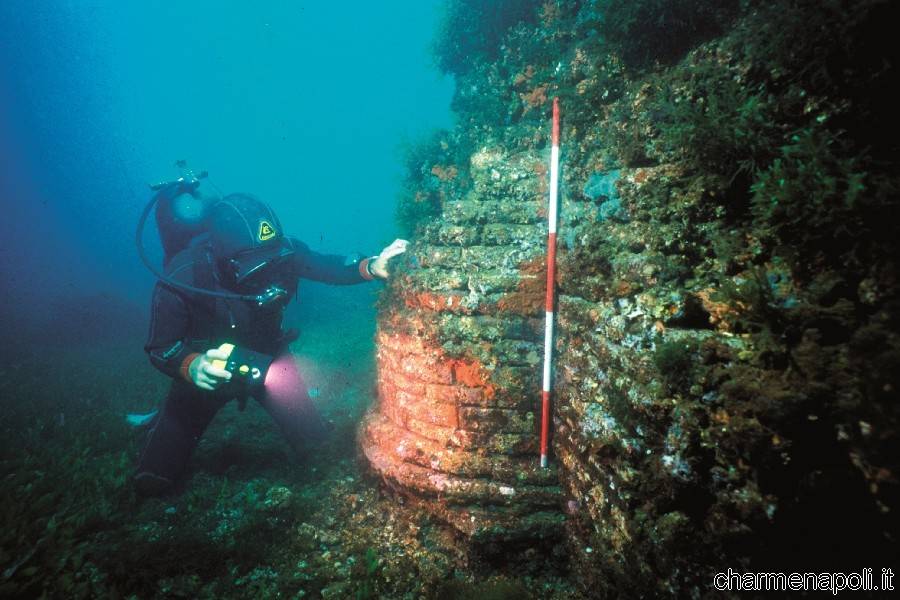 On the rockyshore o fPunta Campanella the melodious voice of the siren Parthenope lured Greek mariners to their doom, but safe passage was ensured by an offering of wine to Poseidon every time they sailed the Bay Sailors knew the risks Odysseus had run after blinding the god’s son, the Cyclops Polyphemus, and were wary of the dangerous strait between the Sorrento peninsula and the island of Capri, so they built a temple dedicated to Athena nearby. TheBay of Neapolis was revered by mariners throughout the Mediterraneanas a place of legendary characters, such as Baios, a companion of Odysseus, who was swallowed up by a whirlpool between Baia and Cuma on the other side of the bay. However, the sea has also conserved treasures for posterity, such as the submerged roads, walls and mosaics at Baia, dragged beneath the waves by seismic activity and now admired only by divers, or the splendid nymphaeum with statues of the imperial family which was found at Punta dell’Epitaffio and is thought to have belonged to the Emperor Claudius. [charme-gallery]The nearby town ofMiseno, named after the herald of Aeneas who died here after challenging Triton, is also rich in archaeology and ancient stories. Now a sleepy seaside town, it was once the naval base for the Roman fleet from which Pliny set sail to bring aid to the towns devastated by the eruption of Vesuvius in 79 AD. TheshoreofMisenois dotted with Roman remains, such as theTempleof the God Augustus, whose relics are now kept in Baia castle, and the remains of the road reputedly built by Hercules to herd the oxen he had stolen from the giant Geryon as the fifth of his twelve tasks. The Roman development of this area eventually put an end to one of the most symbolic and sacred places in the ancient world:LakeAvernus. Renowned as the entrance to Hades, the world of the dead, it was here that the Sibyl had told Aeneas to seek his father and learn the glorious future of his descendants However, Roman pragmatism had cut down the dense forest surrounding the lake to obtain timber for its fleet and become the leading power in theMediterranean.[charme-gallery]