Home Routes Palace of Capodimonte, a jewel in the royal forest 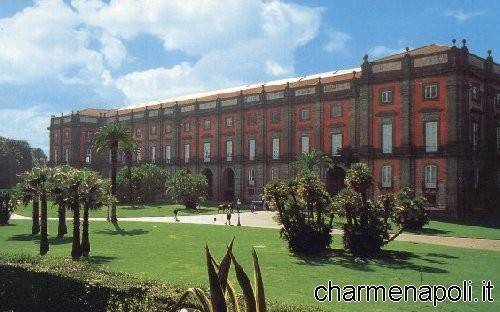 Capodimonte Royal Palace is an earthly paradise: a sumptuous residence built under the Bourbons in the heart of a luxuriant wood, few kilometres away from the city centre, suitable for the accomplishment of kings’ desires, a real jewel laying on the green Neapolitan hill.

Capodimonte park, once known as “Royal Wood of Capodimonte”, with its 134 hectares is the biggest public park of Naples. On Easter Monday hundreds of Neapolitans, attracted by the magnificence of this place and its huge and thriving park, go there for the typical picnic based on eggs and “casatiello”.

The park has three entrances: “Porta Grande”, at the beginning of via Ponti Rossi; “Porta Piccola”, the most famous one, and “Porta Bellaria”, both on via Miano.

The wood of the “Reggia” is a typically Neapolitan one, alternating wide flat spaces with valleys crossed by small rivers, and caves, characteristic of the hills of Partenope’s land. The area next to the Royal Palace hosts broad lawns full of different varieties of plants, flowers, and age-old trees, beside XVIII century buildings, like the “Casino dei Principi”. From this spot unwinds “Porta di Mezzo”, a door used by the kings to enter into the centre of the wood by the means of five wide paths, from which, in turn, branch off a hundred of smaller paths and trails.

These five wide paths, forming a semicircle which embraces the entire park, lead to different buildings: San Gennaro Church (made by Ferdinando Sanfelice), the Royal Porcelain Factory, the Tower Building, the “Casino” of the Queen, and the Capuchins Monastery, built in 1819.

At the time of its construction, the park was meant to be a game preserve and a court residence for the king of Naples, Charles of Bourbon. But soon, due especially to its closeness to the city centre, it became one of the court’s favourite places, second only to Piazza Plebiscito Royal Palace.

Capodimonte turned into a proper royal residence, and it started to receive part of the prestigious art collections that the king had inherited from his mother, Elisabetta Farnese, last heir of the Farnese di Parma house and wife of the king of Spain, Philip V. The rooms of the Palace started to be filled with masterpieces by Titian, Raphael, El Greco, Correggio, Parmigianino, Carracci, numerous paintings of the Flemish school, sculptures by Martini and Giambologna. All these breathtaking works of art, together with many other collections acquired during the centuries, made the Palace, three centuries after its foundation, a world renowned museum.

During the years of “Grand Tour”, the “Reggia” welcomed foreign visitors, scholars, and artists like Winkelmann, Goethe and Antonio Canova, who wanted to admire the splendid art collections and be charmed by the wood, which under Ferdinand II had been turned into the English garden that can be seen today.

The magnificent royal rooms of the Palace, like the porcelain parlour and the king’s room, are so richly decorated that are capable to take the visitors back in time, offering one of the most impressive travels into the history of Naples.