Home Routes Atlantis shines on the seabed of Partenope 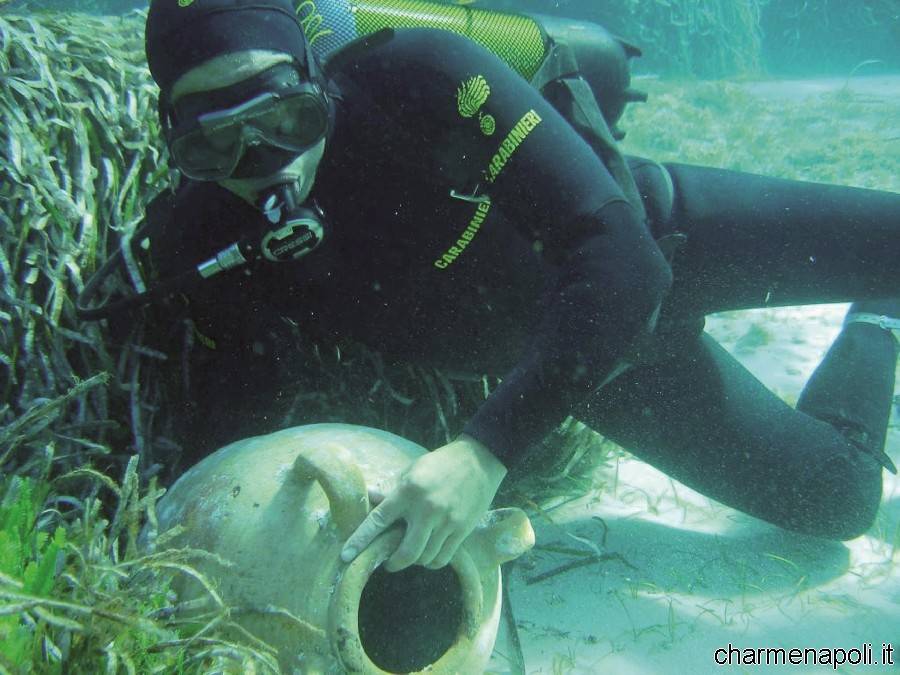 What secrets lie beneath the waves of the Bay of Naples waiting to be brought to light by archaeologists and treasure hunters? Ship wrecks, planes shot down in World War II, and the relics of ancient civilisations are to be found cluttering the bottom of deep chasms as well as in shallower waters. The sea just off the Sorrento peninsula has yielded many finds, as the area was the scene of numerous raids by Saracen pirates in the 16th century as well as being where Julius Caesar’s fleet and many other ancient Roman ships sank. Etruscan, Greek, Roman and even African pottery from the late Middle Ages have frequently been found in fishermen’s nets along with Moorish anchors or masonry works from the many imperial villas that dotted the coast 2000 years ago.

On the other side of the Bay stands Baia, the town dear to the Emperor Claudius, with its underwater mosaics, floors, roads and columns – the remains of a town that seismic activity took beneath the waves just off the coast of the Phlegraean Fields. Now this settlement delights scuba divers who can reach the submerged location which lies just a few metres from the surface. [charme-gallery]This is also the site of one of the most famous shipwrecks from the Italian war of unification: the postal ship “Ercole” which sank on 5 March 1861. Some claim that the mysterious incident also resulted in the loss of important documents regarding Garibaldi’s military expedition and was probably the work of the Piedmont government eager to cover up the role of bankers and politicians in the campaign.

Also hidden in the murky depths are the remains of numerous American, British, German and Italian aircraft that fell victim to anti-aircraft artillery during world war II. Now the planes, their crews and deadly payload rest in eternal peace on the sea bed, half buried in sand and overgrown with seaweed. Even now, fishermen occasionally often have to free their nets of the rusted remains of a Junkers’ fuselage or the helmet of an unlucky fighter pilot. The Deep has jealously guarded certain secrets since the 7th and 8th centuries BC, such as the luxury Roman villa built on a jetty on the coast near the so-called Tomb of Agrippina, which was discovered in 1991 during an underwater investigation conducted by the local archaeological agency.[charme-gallery]

Other relics on the sea bed are less mysterious, however. Divers often descend to explore the remains of the Ashanti, a British merchant ship that sank near Naples a few decades ago during bad weather, taking its cargo of carpets to the bottom of the sea, or the Dutch vessel Dors, which sank in 1964 and now rests on a sand bank24 metresbelow the surface. When ships go down in bad weather there is frequently loss of life, such as in June 2005 when a fishing boat was rammed off the coast of Ischia and sank immediately, or in 1980 when the tugboat Miseno was swallowed up during a storm near Forio. And who can tell just how many secrets and hidden treasures still lie in the unexplored depths of theBayofNaples?