Home History Excavations Harvest in the excavations of Pompeii for the wine of the ancient... 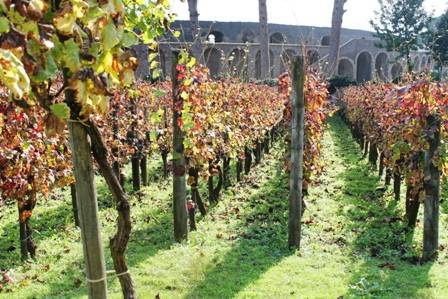 Piedirosso 40%, 20%, sciascinoso and, from 2011, also a ”correction” Aglianico 40%. The harvest in the vineyards of Pompeii ruins today gave a thrill to the visitors who were able to witness the cutting of bunches dark, for the fifteenth year, will produce the wine “Villa of the Mysteries“. A product with the brand Mastroberardino, for top restaurants in the world: USA, Japan, China and, of course, Italy. A “emotion” sold at considerable prices: 60 euro from the manufacturer to the restauranteur that reaches and exceeds 100 euro at the table.

The royalties are insured to the Superintendence of 5%, in addition to the thick of 6 thousand euro for the cultivation of a half acre of land surrounding the Foro Boarium, Triclinio Estivo, the Domus of Nave Europa and Caupona Gladiator. But fixate over a glass of red of ancient Pompeii is priceless. And the first bottles, those collections of 2001, for collectors are invaluable. The affected areas today include all the vineyards of Regiones I and II of ancient Pompeii, spread over 15 plots of different extension and a potential yield of about 30 quintals of grapes.

“The uniqueness of this crop – said Piero Mastroberardino, professor at the University Federico II of Naples – is the ancient technique used in viticulture, which is similar to that of two thousand years ago, reproduced on the basis of the casts of the roots of the vines”. The implantation is carried out at a distance of 4 feet to 4 feet Romans Romans: that is 1,20 meters to 1,20 meters. Successful cultivation of vineyards in the ruins of Pompeii has led several archaeological sites in the Campania region and outside the region to ask the Superintendent and Mastroberardino to replicate the experiment elsewhere. ”For the moment it is impossible – says Mastroberardino – For example, Oplonti, the blanket of volcanic material covered everything, and where gardens could present crop of the genre, now it’s all buried structures inhabited”.

All this makes only the harvest in the ruins of Pompeii which has so stirred the superintendent Massimo Osanna to offer the instant the establishment of a “scholarship” for a doctorate that deepens further these studies. The wine “Villa of the Mysteries”, explained Hosanna and Mastroberardino, “is mainly a way to tell and to learn about Pompeii with its culture and its ancient tradition and as an element of development and at the same time to defend the territory, the landscape and the environment”.Studies that have applied for and that requires pass for the Laboratory of applied research in this Excavations and coordinated by Ernesto De Carolis that, this morning, opened the doors of the mysterious place where they are stored legumes and seeds of medicinal plants, skulls and shells found during the excavations. The new frontier is the study of tissues whose plots are still visible enlarging the casts of the bodies incinerated by the catastrophic eruption of Mount Vesuvius in 79 AD.