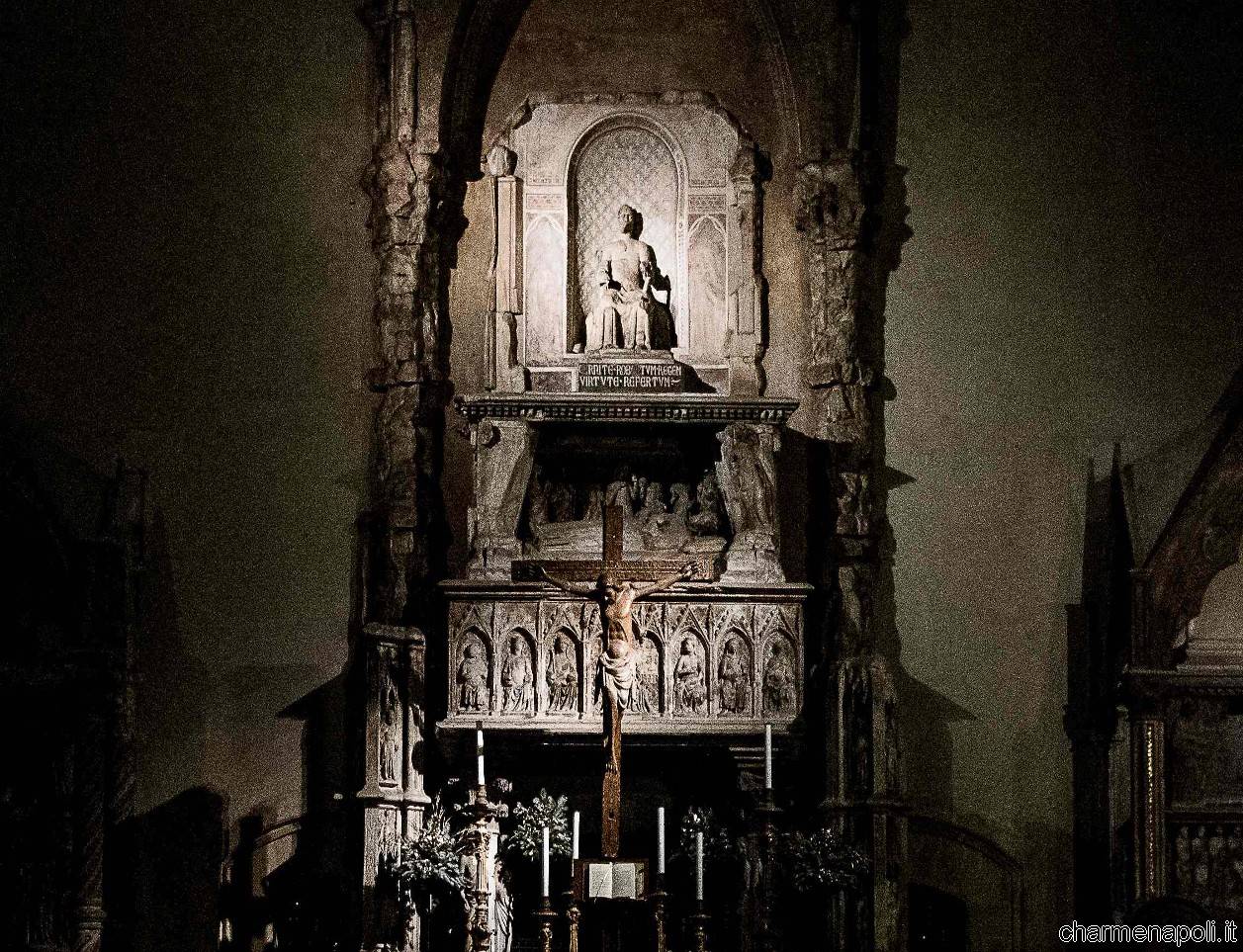 Neapolitan nobles were often buried in the most important religious buildings and churches of the city. The tombs were often realized by the greatest artists and sculptors of the time, such as Tino da Camaino or  Giovanni da Nola. It is almost impossible to list all the memorials and graves of the churches of Naples. Only in Church of San Domenico Maggiore more than twenty-seven chapels can be found, all extraordinary and beautifully decorated. The last Emperor of the Holy Roman Empire, Corradino di Svevia, grandson of the legendary Federico II, is buried in Naples, in the Basilica of Santa Maria del Carmine Maggiore. Defeated by the army of Charles I of Anjou, he was beheaded at the age of 16, in Piazza Mercato. His remains were moved to the church thanks to the entreaties of his mother. In the same Basilica, there are also the remains of Luisa Sanfelice, noblewoman executed in  1800 at the behest of King Ferdinando. Her character inspired Alexandre Dumas (father) in the novel “The San Felice”. The Royal Basilica of San Giacomo degli Spagnoli hosts another monument worthy of note. It is that of the viceroy Don Pedro de Toledo. It was realized by Giovanni da Nola, who took almost twenty years to complete it.[charme-gallery]The Bourbon nobels rest in their family chapel, in one of the side areas of the Basilica of Santa Chiara. Buried there are Ferdinando I, Francesco I and his wife Maria Clementina of Habsburg-Lorraine and Maria Isabella of Spain; Ferdinando II with Maria Cristina di Savoia; the last king of Naples, Francesco II, “Franceschiello”, with his wife Maria Sofia di Bavaria and their daughter Maria Cristina Pia. In the famous monastery hosts the spectacular funeral canopy of Roberto D’Anjou plus the tomb of Sancha of Aragon, whose ghost still wanders through its corridors and rooms. Many Neapolitan nobles are also buries in Santa Chiara, including those of the Duke Giovan Battista Sanfelice, locked in a greek sarcophagus of the fourth century BC. Ladislao Di Durazzo, noble of the Angevin family, is buried in the church of San Giovanni a Carbonara, where the sculptor Andrea da Firenze erected for him an imposing monument in late-Gothic style. In the apse of the church there are also two large chapels dedicated to the Caracciolo family. The admiral Francesco Caracciolo – to whom the famous Promenade of Naples is dedicated – is buried in the church of Santa Maria della Catena, in the heart of Saint Lucia. In the Church of San Lorenzo Maggiore are to be found the remains of Ludovico d’Angiò and Caterina of Austria. The monument to Caterina was the first opera performed in Naples by the great Sienese sculptor and architect Tino da Camaino. In the same church, there is also the tomb of Ludovico Aldomorisco and the àburials of the Cacace family, decorated with busts and statues by Andrea Bolgi. In the transept, it is also possible to admire the tombs of Carlo di Durazzo, Roberto D’Artois, Giovanna Durazzo and what remains of the tomb of Luigi Caracciolo.[charme-gallery]The remains of Andrea of Hungary rest in the Duomo of Naples, where there are many other important memorials too. In particular, those of Carlo I of Anjou, King of Naples; Carlo Martello of Anjou, King of Hungary, and his wife Clemenza of Habsburg. The tomb of King Alfonso I of Aragon is located in the Church of San Domenico Maggiore, together with 38 wooden crates covered with silks, brocades and other precious materials. Those are the famous “Aragon Arks”, which contain the bodies of ten kings and princes of Aragon and other Neapolitan nobles. The Church of San Domenico Maggiore holds  many noble chapels. One of the most famous is the one known as “Chapel of Zi ‘Andrea“, which belonged to the de’ Franchis family. This deserved a visit because it housed the famous artwork “Flagellation of Christ” by Caravaggio, commissioned by Tommaso de ‘Franchis and now on display at the Capodimonte Museum. The tomb of the mysterious yet fascinating Raimondo di Sangro, Prince of Sansevero, alchemist surrounded by many legends, lies in the extraordinary Cappella Sansevero, where it is possible to admire the timeless masterpiece “The Veiled Christ”.[charme-gallery]