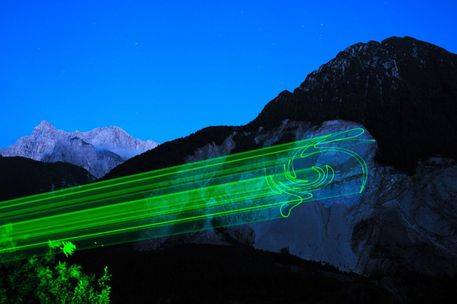 On September 4, the island of Capri is preparing to host the first edition of the Capri The Island of Art: an open-air festival – the brainchild of Franco Senesi – involving more than 20 artists of national and international contemporary, invited to dialogue with the places and stories of the island. Performance, audio and video installations, large sculptures, projected at night exhibitions in public and private places make up a busy program which lasts for four months and touches the city of Naples, in an ideal bridge between sea, land and subsoil with the involvement of Art Stations Underground and main sites of contemporary museums. Twenty-one site-specific projects, coordinated by the two curators Marco Izzolino and Lucia Zappacosta – in addition to two independent projects – make up the program of the event caprese, with 5 main installations of Lawrence Weiner, Santiago Sierra, Andrea Aquilanti, Mario Airò and Bianco Valente. Among the examples, the rocky outcrop of Mount Cappello at Anacapri (side of Monte Solaro) will become a natural canvas on which to life the laser projection devised by Airò, artist specializing in the transformation of places through the use of lights and beams: for 15 nights, the work of Mario Airò will be visible from the Piazzetta, around the side of Marina Grande and also from the sea. Project in the project is the exhibition “Canone Inverso” in an area of ​​the fourteenth-century Certosa of San Giacomo, the Canonica, which reopens to the public after a partial recovery. The oldest monastery of Capri becomes stage and beating heart of the festival and in the spaces of the rectory will host four major installations of the artists Alessandro Cannistrà, Peter Demetz, Rocco Dubbini and Gino Sabatini Odoardi.