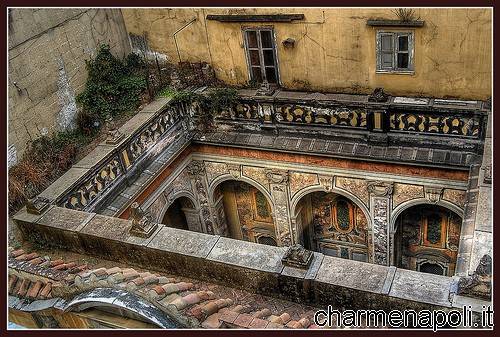 Many are the historical and cultural sights that the beautiful city of Partenope offers citizens and visitors during the Easter holidays. And take heed because the usual routes, including not only Italy, but the whole Terra Felix is full , this time adding interesting and unusual tours to some of the most beautiful places of the city on the Gulf, which is usually closed to the public.

Yes, because if it is true that some of the most majestic pompeian domus will return to throw open its doors to the public during the holidays, as will happen in Naples for the monumental church of Donna Regina Vecchia, a real jewel of Gothic architecture, remained unchanged over the years, but long since closed the flow of tourists in Naples.

Recall that the monastic complex of Via Settembrini had remained inaccessible despite the restoration work, because of some bureaucratic disputes.
Fortunately, in view of Easter , 2014, the doors of the sacred building wanted by the Poor Clares of the Monastery of Santa Maria Donna Regina, will return to widen the many visitors who already in the day Saturday, April 5 as part of the tour reserved for school administrators and teachers, who will be given the opportunity and the privilege to attend the presentation of the interesting guided tour called “from Gothic to Baroque.” Only a prelude to the more complete reopening of the structure that will hopefully happen soon. And this time, for everyone“.

But perhas not everyone knows that the church , the office which houses the Diocesan Museum of Naples, was built at the turn of the thirteenth and fourteenth century and completed in 1316 thanks to the donations of Mary of Hungary, wife of King Charles II Anjou.
Not by chance is dedicated to the reigning one of the most important works of the building: the splendid sepulchral monument, the work of Tino da Camaino.

Subsequently, the system was restored,during the seventeenth century,assuming the Baroque forms that characterize it today. But that’s not all! In fact, prepare to get your fill of wonder and stare when you find yourself in front of the magnificent frescoes of the church attributed to the school of Pietro Cavallini, miraculously survived a fire in 1390.

Well I must say we are in the presence of one of the most precious and rare examples of the artistic cycle fourteenth century (and century) in Europe,and not surprisingly it is the prestigious Naples guardian. A cycle Gothic born and evolved into … Baroque.