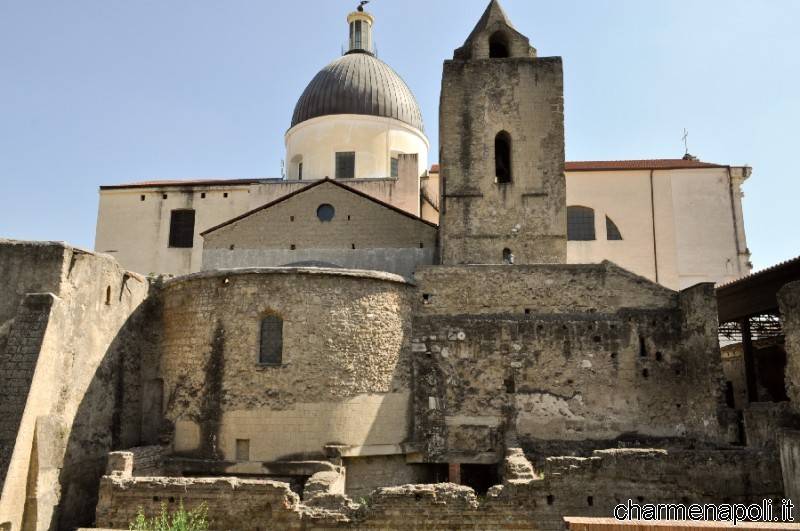 Welcome to Cimitile, the city of saints and a place of  pilgrimage for senators and popes. Formerly known as Coemeterium when it was the necropolis of the town of Nola, its thirteen churches and ruined ancient basilicas are decorated with mosaics and frescoes which are some of the rarest examples of early Christian art in Europe. The history of Cimitile spans the warrior civilisations of the Ausonians, Oscans, Samnites, Etruscans and Greeks who contended the area before Rome’s legions took control in 314 BC, but its name derives from the coemeterium or cemetery built along the Via Popilia north of Nola used by early Christians. The first catacombs and crypts were dug here at the time of Christian persecution, but Emperor Constantine’s Edict of Milan (313 AD) transformed the ancient burial ground into a religious citadel, whose tiny chapels and cemeteries were converted into the first majestic churches. [charme-gallery]The basilica dedicated to Saint Felix is particularly famous. Born in Nola, the son of a rich merchant from Syria, Felix became a priest and was imprisoned and tortured before being miraculously released by an angel. He lived his entire life in poverty and died after 313 AD, but he is still venerated today by the Catholic Church with a shrine dedicated to him on the site of his tomb which Pope John Paul II visited in 1992. The building was extended to become a basilica in the late 4th century by Pontius Meropius Anicius Paulinus, later known as Saint Paulinus. A Roman senator from Bordeaux, Paulinus had a troubled life and converted to Christianity after moving to Nola, where he had a second, larger basilica built near the church of Saint Felix, to whom Paulinus was devoted. The two basilicas were later extended to become a single complex, decorated with frescoes depicting scenes from the Old and New Testaments as well as mosaics, capitals and bas-reliefs. The bell tower in the oldest part of the complex suggests that it was Saint Paulinus who first conceived the idea of church bells (then called nolae) and, indeed, he is the patron saint of bell-ringers. Cimitile was gradually transformed into a ‘holy city’ with the construction of numerous monasteries, churches and dwellings thus creating what is now the modern town. [charme-gallery]The town was frequently destroyed over the 250 years of Longobard dominion, and severe flooding in the 6th century almost wiped Nola and its surrounding necropolises off the map. But pilgrimages kept the ancient saint’s legend alive and the people of Nola slowly rebuilt the complex, transforming the remains of the Nova basilica into a tomb building and including the apse and nave of Saint Felix’s into the church of Saint John the Baptist and Evangelist in the 12th century. Other churches were also built, such as Saint Stephen’s (6th century), Saint Thomas’s (11th-12th centuries). In the 9th century, Bishop Leo III ordered the whole complex to be radically restructured to create the Holy Martyrs basilica housing ancient frescoes from the catacombs and a beautiful marble portico, as well as exquisite 10th and 11th century frescoes of the Passion of Christ and the Crucifixion. Leo III also had a 5th century building on the western side of the basilica dedicated to Saint Calionius, embellishing it with an altar and niches depicting Saints Felix and Paulinus.[charme-gallery] In the 2000 Jubilee, the Cimitile basilicas became a major destination for pilgrims and, despite the devastation suffered over the centuries, the City of the Saints remains a unique archaeological and monumental complex providing an insight into early Christian art and culture with Romanic and Byzantine influences. The Antiquarium museum houses ancient epigraphs and artworks found on the site, making it a veritable pearl of religious and cultural beauty to be visited at least once in a lifetime.