Home Art Churches Night at the Shrine: grand tour to Pompeii between history, art and... 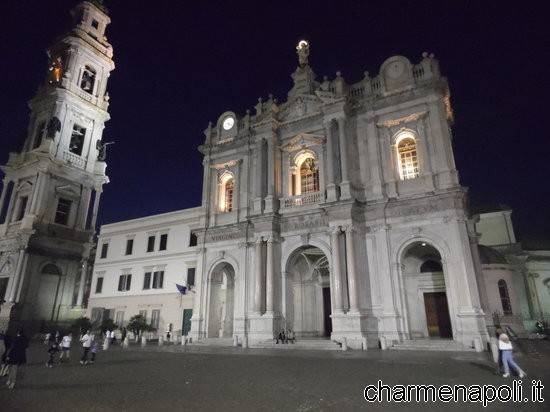 A tour with the five senses is what offers “Night at the Shrine” which repeats for the third year in the Curia of the Marian basilica, with the Youth Ministry led by Don Ivan Licinio. The initiative includes guided evening tours to places of historic and artistic interest of the Temple, founded by Blessed Bartolo Longo at the end of the nineteenth century. In collaboration with the Historical Archives “Bartolo Longo”, the participants of “Night at the Shrine” will be led by young Don Licinio in paths, as well as visual (works of art and monuments), also tactile (touching books that belonged Blessed Bartolo Longo), olfactory (women will be given a rose garden of Blessed Longo) and taste when, at the end of course, will be offered melon and figs to all, “How did Bartolo Longo with its orphans”, he told the young Don Ivan, which this year also included a guided tour in English and Lis (sign language for the hearing impaired). The dates of the event are: 26 and June 27, 17 and 18 July. The guided tours start at 8.15 pm hours, at 8.45 pm (in English and LIS) and at 9.15 pm. The tour, which lasts an hour, has the cost of 3 euro, intended to finance the journey of the boys at the 2016 World Youth Day with Pope Francesco in Krakow. The tour in the sanctuary at night includes a visit of the Historical Archives, the Chapel “Bartolo Longo”, the Old Sacristy of the Basilica, the Crypt, the Garden of Saints Pilgrims, Facade of Monumental and the Campanile. The event was presented by Msgr. Pasquale Mocerino, Rector of the Shrine, Don Salvatore Sorrentino, director of the Office for the Pastoral Care of Vocations and head of the Library and Historical Archives “Bartolo Longo”, and the boys of the Youth Ministry, with Don Licinio. Absent the bishop, Monsignor Tommaso Caputo.