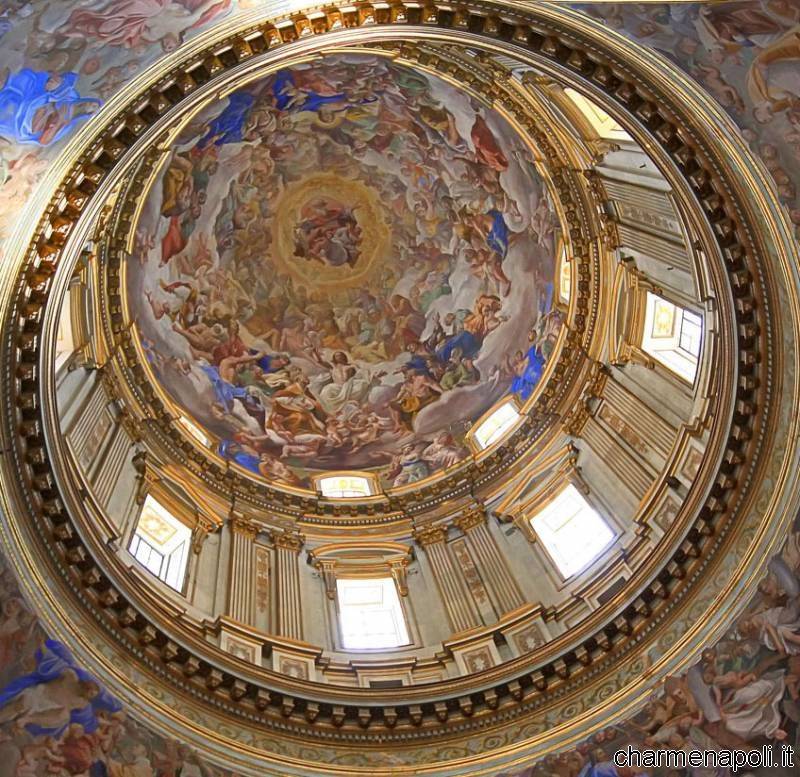 The Cathedral of Naples, contrary to what many may imagine, is not dedicated to the patron Saint January (the whole city celebrates him on September 19), but to Santa Maria Assunta. It was Charles of Anjou, in the year of our Lord 1294, to advocate the building of the most beautiful and richest of all the churches of Parthenope. The French king wanted it there, not far from the places chosen by the Cuman settlers to build the nucleus of Neapolis. A stone’s throw from the maze near the Decumans, the Franciscan citadel of Santa Chiara and the remains of the mighty Greek walls of Piazza Bellini. In the same place where a pagan temple first and two ancient basilicas then were raised, being for long time pilgrimage destination: Santa Restituta and ‘Stefania’, so called because it was wanted, at the time, by the Archbishop Stephen.

To make room for the new and more capacious religious structure, the former was reduced to the status of Chapel and then included in the new building. The latter, was completely razed to the ground. The Cathedral of Naples presents itself in the eyes of the visitors, with all its vicissitudes and legends, with a Latin cross plan: three aisles that run through the interior. Spacious and bright, they are divided by pillars topped by massive arches that seem to chase each other in their static escape to the high altar. One Hundred meters: this long is the ”central corridor“, which ends in an apse. Above, the coffered ceiling is twined in carved and gilded wood and it is simply magnificent. Along the sides, the aisles have an impressive vaulted ceiling with sparkling Baroque decorations and, all around, particular seventeenth-century stucco.[charme-gallery]

The facade is distinctly Gothic. The one designed by the workers of King Charles no longer exists. Simply destroyed. Demolished, along with the bell tower, by the violent earthquake in 1349 that brought Naples to her knees. However, the city did not lose heart. She rolled up her sleeves and rebuilt it, even more beautiful than before. Unfortunately, of that reconstruction, completed in the course of the XV century, only the main portal by Antonio Baboccio from Piperno remains today: enough, however, to suggest the idea of a masterpiece whose traces are only in the annals and in the history books.

At the end of ‘700 the façade underwent restyling, under the guidance of the Roman architect Antonio Senese. At the end of’800, Enrico Alvino redesigned it again at the behest of Cardinal Sforza, conferring it the appearance with which it is presented today to the devoted. More and more constructions! Landscaping and enrichment works of a building in which the best artists of the “Boot” alternated.[charme-gallery]

The aisles, with the triumphant countless chapels and niches that are wide open on the perimeter, brilliant pearls in an already rich treasure chest, bear witness to the various changes that the artistic taste has gone through over the centuries. In particular, two are the chapels that stand out. The area of Santa Restituta, with its fourteenth-century sculptures and works by Luca Giordano, clear traces of the early Christian past of the town of Virgil: the Emperor Constantine wanted it, before it was incorporated into the Cathedral of Naples. And the one of Succorpo, an example of Renaissance architecture, dating from the late fifteenth and early sixteenth century, perhaps built according to Bramante’s design, immediately under the apse. A few steps from the doorway that leads in the spacious rooms of another building also centuries old: the Baptistery of San Giovanni in Fonte, perhaps the oldest Christian church in the West.

The symbol par excellence of the Cathedral dates back to the first half of the XVII century: the Chapel of the Treasure of San Gennaro, a former offering from the people of Naples who liked to pay homage to the patron for relieving the city from the scourges that in those years of eruptions, cataclysmic and wars of succession tormented the capital of the Kingdom. A monument in the monument! Unique and valuable of its kind for the concentration and the prestige of the works of art that are kept inside, as well as by the number of world-renowned artists who took part in its realization. It takes just a look at the gate and floor designed by Fanzago, or the marble and sculptures by Bernini school, the altar of Solimena, the frescoes, the paintings and the niches that hold the silver bust and the ampoules with the blood of Saint January, to realise what richness shines under its vaults. Unique works, rare and inimitable, which make the chapel more than an artistic gem: a concentration of priceless works of art.[charme-gallery]

It’s in this chapel that every year, the first Saturday of May, September 19 and December 16, the devoted of Parthenope eagerly await the three miracles of the liquefaction of the blood of San Gennaro, who is buried beneath the chancel, in a crypt built in the late fifteenth century, right in the foundations of the overlying Succorpo.  Dedicated to San January is also the Museum of the Treasure, built outside of the Cathedral, that houses all the works of art, jewellery and silverware donated over the centuries as a sign of devotion to the patron saint of the city. Mountains of jewellery and objects of worship that make the treasure of the Saint higher than the one of the Crown of England.