Home Art The collection of King Charles shines beneath the vaults of the Caserta... 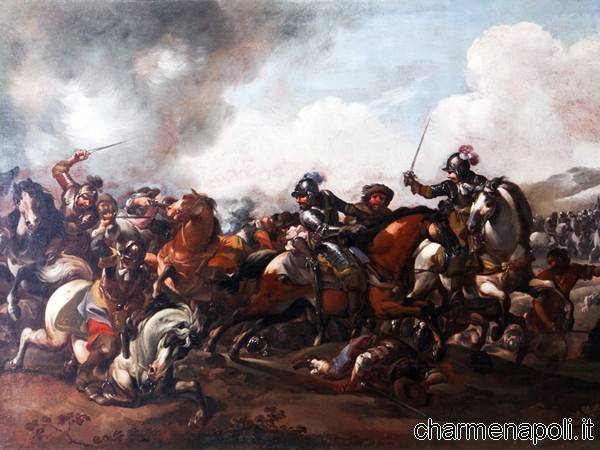 All set inCasertafor the inauguration of the exhibition ” The Profession of Arms and diplomacy : Alexander and Elizabeth Farnese in the collections of the Royal Palace of Caserta ,” organized by the Superintendence for Architectural Heritage Landscape Historical Anthropological Heritage for the provinces ofCasertaandBeneventoin partnership with Civita . The event is scheduled for October 23 (and up to January 6 , 2014) at 12 am, in the historic apartments of the royal palace of Terra di Lavoro . The exhibition , curated by Vega de Martini, will revolve around the two charismatic figures of Alexander and Elizabeth Farnese. The first ” flag ” of the Catholic Spain of the sixteenth century , the second wife of Philip V of Spain, as well as mother of the future King Charles of Bourbon. Both will live again through the exhibition of paintings by Giacinto Ilario Mercanti, said Spolverini (Parma , 1657 – Piacenza , 1734 ) that tell the ” Gesta ” of Alessandro Farnese and the ” Fasti ” depicting the preparations for the wedding of Elizabeth. For most of the paintings are part of the vast collection inherited by Charles of Bourbon when he obtained the Duchy of Parma and Piacenza : the historical events of the era not only brought Charles to the throne of Naples, but also indirectly marked the destiny of the immense wealth art of the Farnese family . Arrived in Naples , in fact , the collections ( a core of about 37 paintings including the ” Splendours of Elizabeth ” and some ” Battles ” in much of the Spolverini ) , they found an initial installation in the former Royal Palace and then decided to transfer them to Capodimonte. Finally, in 1859 , were transferred to Italy for the purpose of decorating the newly-formed Royal Armory, a project then do not go through. These are the paintings that form the core of the exhibition which will be joined and works from other museums such as the large painting recently attributed to the painter Sebastiano Ricci depicting Alessandro Farnese enthroned receives a petition to the presence of the Faith attributable to the Museum of Piacenza ; the Portrait of Alessandro Farnese nell’armatura of Alonso Sánchez Coello ( Benifayó , 1531 – Madrid, 1588 ) of the National Gallery of Parma and the portrait of Elizabeth Farnese made by Giovanni Maria Delle Piane said Molinaretto ( 1660-1745 ) of the Collegio Alberoni ( Piacenza ) . Will be on display , also – from the Museum of Capodimonte – a set of armor that belonged to Alexander and ancient volumes pertaining to the University Library of Naples relative to both the military ventures of the leader is to Farnese ” Fasti ” of Elizabeth.