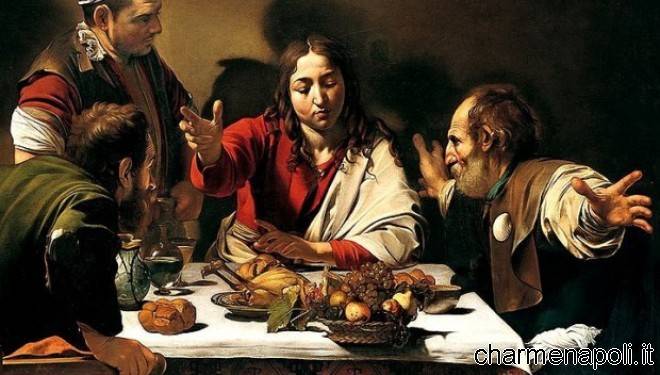 From the overview of the detail … real. The masterpieces “revisited” by Leonardo, Raffaello and Caravaggio back in the Neapolitan Complex of San Domenico Maggiore in a new and interesting look. The reproductions of the works signed by three great artists were already housed in the rooms of the historic building of Naples, on the occasion of the Mostra Impossibile to 117 reproductions of paintings and frescoes re-proposed on backlit panels in actual size, very high resolution and in strictly chronological order.
Now, after the huge success enjoyed by the festival, with more than eighty thousand visitors in just over six months, it will be possible to admire again – this time, however, to the smallest detail – the masterpieces forged by magical trio of masters. All this will be possible thanks to the exhibition “Masterpieces in Detail” which will open from July 22 until October 10, 2014 in the spaces of the great refectory of the convent of San Domenico Maggiore in Naples.

[charme-gallery]
Within the complex will set up a large screen (10m x 5m) where scrolling the images of 117 masterpieces by Leonardo, Caravaggio and Raphael played in high definition and down to the smallest of details.
To make the show more appealing to detail … think about this a pool of twenty young graduates and PhDs in Art History, which will alternate in a series of evening meetings dedicated just to the knowledge of the masterpieces visible in the convent of San Domenico Maggiore.
It did not end there because in addition to the works already known, visitors will also have the opportunity to dive to 360 ° in the art world, through sections devoted to biographies of Leonardo, Raphael and Caravaggio with screening of films, dramas and documentaries in their dedicated made ​​by RAI over the years.
So much new material, then, as the presence of reproductions and authentic works.
And ‘the case of the Blessing Christ, taken from a lost prototype of Leonardo and painting on board according to the iconography of the Salvator Mundi, or the beautiful dress in damask that covered the body of Isabella of Aragon, now buried in the sacristy of the Church of San Domenico Maggiore.
So you just have to go to the show and to equip itself with powers of observation and curiosity, to explore the beauty of the artistic and cultural heritage of Italy. Obviously reproduced in every detail!