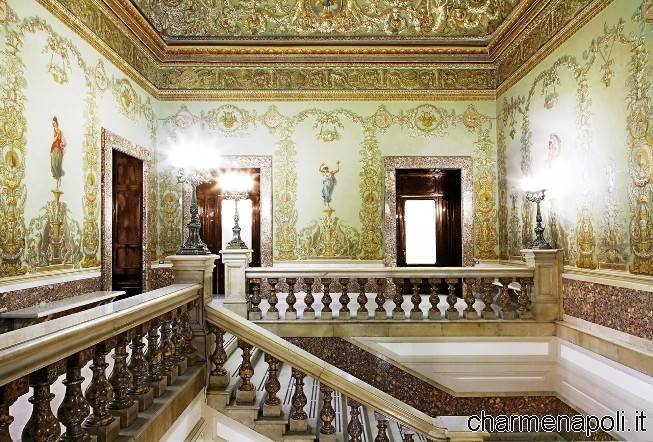 When the weather does not detract from the beauty and, on the contrary, it increases the charm. It happens to Naples, Palazzo Zevallos Stigliano, erected between 1637 and 1639 by Cosimo Fanzago on the will of the Flemish family of Zevallos who wanted them for a full house on the central Via Toledo. Completely “reorganized” and rearranged, the building now houses the headquarters of the project fixed Galleries Italian Intesa Sanpaolo.
What better combination then if what he sees marry perfectly the story of an ancient building with the magic that only the great works of art are able to provide?
But let’s take a little taste of what you can see below the times of this centuries-old building.
[charme-gallery]

On display, in fact, there are over 120 works, with many masterpieces of painting dedicated to the city of Naples, represented by the seventeenth century until the early twentieth century.
For the works of the ‘600 in addition to the famous Martyrdom of Saint Ursula Caravaggio’s last painting done by the great Lombard master before leaving Naples in 1610, through the halls of the large building you can also admire Judith Slaying Holofernes, Louis Finson, the Holy Family with Saint Francis of Assisi, Angelo Caroselli and Samson and Delilah by Artemisia Gentileschi.
Still, among the paintings of the Neapolitan school stand out three masterpieces by Bernardo Cavallino (the Rape of the Sabine Women) Luca Giordano and Francesco Solimena (Hagar in the desert).
Jumping from one century to another, including those that can be judged in its own right real “works of art”, we find for the eighteenth-century works by Francesco De Mura, Gaspare Traversi, Paolo Porpora, Baldassare De Caro, Giovan Battista Ruoppolo, Giuseppe Recco and Gaspar van Wittel.
Rich also the period before the nineteenth century with a section devoted to the views and the School of Posillipo, with small paintings of Anton Smink Pitloo, and then paintings by Giacinto Gigante, Gabriele Smargiassi, Salvatore Fergola, Nicola Palisades, Domenico Morelli, Federico Rossano, Edoardo Dalbono, Edoardo Franceschini, Gioacchino Toma, Francesco Mancini, Vincenzo Migliaro. Finally, the many works on display in various rooms including those of Vincenzo Gemito, a collection of pottery, bronzes and drawings of rare and precious value.
An explosion of artistic excellence guarded from the historic noble residence defined by the writer Carlo Celano as “a gallery of ‘beautiful paintings that are in Naples, and there really is vedeano beautiful dipinture, et in quantity, de’ famous old masters as well as modern. ”