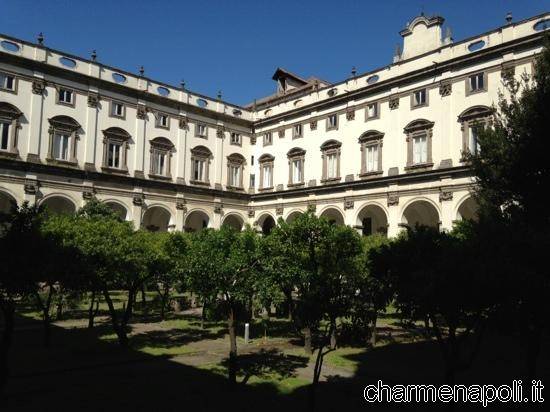 A beautiful blue and white tiled floor with an old well in the centre of a 16th century courtyard reflecting the tastes of the Kingdom of Naples, while beyond a lush, green garden offers an earthly reproduction of Eden. Two different concepts of what a cloister should be; two works of art blended into one in the House of the Oratorian Fathers of St. Philip Neri in the centre of Naples. It is to be found in an insula from the ancient Greco-Roman city of Parthenope and is now one of the most majestic monuments in Naples: the church dedicated to the Nativity of Mary and All Saints. It was built between the late 16th and early 18th centuries on the site of Palazzo dei Serripando, the seat of the family of Cardinal Girolamo Serripando, head of the Augustinian order and champion of the Counter-reformation[charme-gallery] Features from the previous building were incorporated into the new complex opposite the cathedral, and acquisitions and donations of land, as well as the demolition of some nearby buildings, made it possible for the Oratorians, or Girolamini as they are frequently called, to extend the church until it became one of the largest in the city although, unlike other buildings in Naples, its more classical lines reflected a Tuscan renaissance style. [charme-gallery]The complex is renowned above all for its two cloisters. The smaller ‘Majolica Cloister’ created by Giovanni Antonio Dosio owes its name to its chequered blue and white floor tiles bounded by late 16th century porticoes. The ‘Orange Grove Cloister’ was designed by the architects Dionisio di Bartolomeo and Dionisio Lazzari to give the appearance of a 17th century garden, i.e. below ground level and connected to the ambulacrum, the arcade around the choir and apse of the church, by a staircase – a shortcut to paradise reserved for the Oratorians