Home Culture When Naples took up arms against the invader 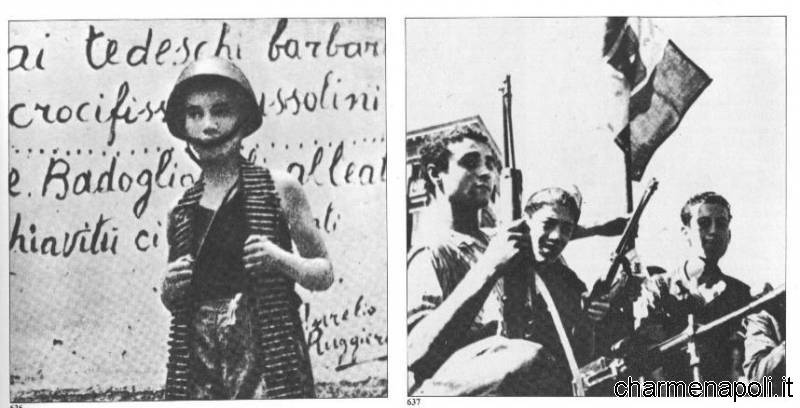 Bombed by the Allies, who destroyed most of the structures and buildings of the port area, causing thousands of casualties among the civilian population. Occupied by German troops, escaping from Salerno under the pressure of the Anglo-American army. This is how Naples looked seventy years ago. In September 1943. A disputed and humiliated city. Destroyed and tormented by three years of war.

After the armistice of September 8 and the bloody fighting that had occurred on the coasts of Paestum, Agropoli, Battipaglia and Montecorvino, the ancient capital was waiting, with bated breath, the moment of the long-awaited liberation. The city lived hours of anxiety and awaiting: the Allies advanced from the south to Rome. However, their march was fiercely opposed by the divisions of the Reich. Twenty days after the landing of Salerno, the Allies were quite distant from Naples. The Germans decided to leave Parthenope, but not until it burned to the ground (loyal to the diktat issued by Hitler who, from his bunker in Berlin, ordered to bring Naples to ‘mud and ash’), and without sparing ill-treatment of the citizens.[charme-gallery]

Episodes of intolerance. A real oppression which was counterbalanced by the tenacious resistance of Naples. So, on September 27, tired of suffering, tired of witnessing roundups and executions of innocent people, Naples rose against the troops of the Commander Walter Schöll, the German officer who established a curfew declaring a state of siege, with the order to shoot all those who dared to lift a finger against the soldiers of the Reich. ‘Every German soldier wounded or slain will be revenged a hundred times’, an announcement read.

The battle quickly exploded in Vomero, where, inside the local sports field, the prisoners for forced labor were herded, raked up by the German forces. In the Pagliarone farm, where now Belvedere St. is, a squad of armed men stopped a German car, killing the sergeant who was driving. Then the outbreak spread with other breeding-grounds in various parts of the city. In a spontaneous way. Without any connection.[charme-gallery]

Among those who, in those days, took up rifles and pistols, there were also dozens of boys and street urchins, many of which destined to lose their lives in the fighting. The people reacted the best they could. From the balconies and windows, people threw down anything to the Germans: pots, mattresses, various objects. And the barricades were scattered everywhere in the foolish attempt to block the advance of the tanks of the Wehrmacht. Battles were in Materdei, Port’Alba, Foria St., Capodimonte, Soccavo, Porta Capuana and lasted four long days with large bloodshed.

On September 30, the German troops abandoned Naples, leaving the city in the hands of the insurgents. The next day at 9.30 am, the first Sherman allied army could make their entrance in the streets of Parthenope, finding it already cleared of Germans. Naples was the first of the few cities in the Peninsula to free herself. With her own hands! The analysis of the “Four Days” was tremendous (From the records of the Poggioreale cemetery, the fallen are 562, even though the Ministerial Commission calculated ‘only’ 155 and some historians a little more than 300, including partisans and civilians). However, it served to show what the Neapolitans were made of and what pride the pearl of the Gulf was endowed with. The city was indeed awarded the gold medal of the Italian Resistance.