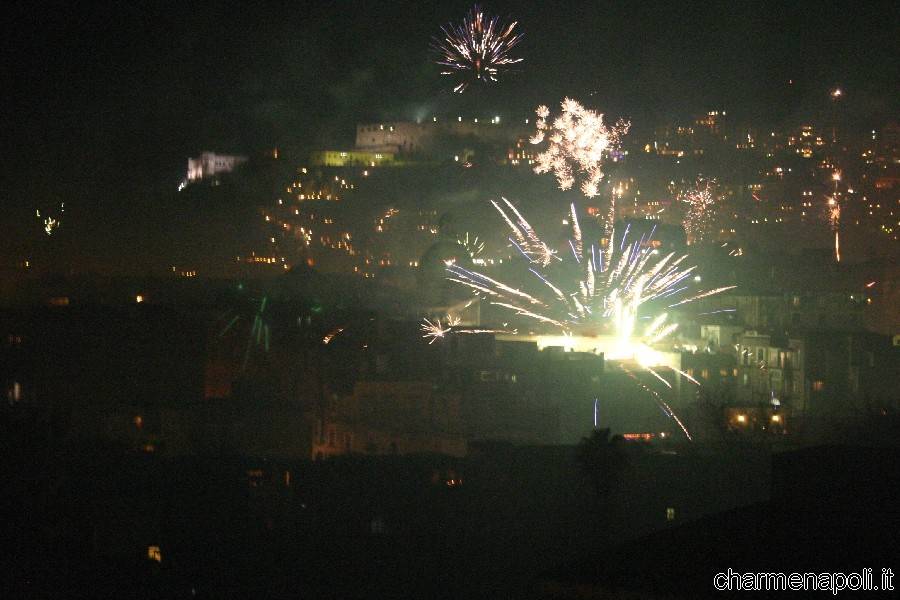 London’sTrafalgar SquareandNew York’s Times Square are just two international venues in which to herald in the new year, but over the past decadeNapleshas also become a popular destination. The success formula of the Neapolitan New Year sponsored by the  Campania Regional Government is a combination of music and culture, with the participation of famous contemporary artists and singers, and the unforgettable midnight firework display above Castel dell’Ovo. The 1996 event saw Luca Carboni and Nino D’Angelo performing beside Mimmo Paladino’s salt mountain sculpture while in 1997 Lina Sastri and Aurelio Fierro sang amidst Jannis Kounellis seminal compositions. The following years included what was to be Renato Carosone’s final concert and performances by Massimo Ranieri and Lucio Dalla (who insisted on being on stage at midnight to see the fireworks!). 2001 saw the return of Edoardo Bennato, in a square dominated by Anish Kapoor’s huge red butterfly, while in 2002 Almamegretta rocked Joseph Kossuth’s Piazza Plebiscito with their Neapolitan dub sound. New Year 2003 was dominated by female Neapolitan singers and artist Rebecca Horn, who ‘embellished’ the square with 333 human skulls. Peppe Barra led the festivities in 2004 with Neapolitan folk songs in the shadow of a huge stainless steel spiral created by Richard Serra, while the world music of Enzo Avitabile called the tunes in 2005 in Fabro’s spectacular setting. In 2006 American artist Sol Lewitt filled the square with white stone bricks while Fiorella Mannoia kept guests warm with her dulcet tones and Sal Da Vinci performed in Piazza Mercato. Last year the square was lit up by Jenny Holzer’s contradictory vision of the world projected onto the church of San Francesco di Paola, while local boy Massimo Ranieri again sang in Piazza Plebiscito and Caparezza performed in Piazza Mercato. [charme-gallery]To celebrate 2008, the old parade ground has opened its doors to an authentic parterre de rois. In concert: Khaled Bregovic, Enzo Avitabile, Sal Da Vinci, Tullio De Piscopo, Gigi Finizio and Marco Zurzolo. The doors opened in 2009 with performance by Daniele Silvestri and Maria Nazionale. And that of 2010 which brought the shadow of the Plebiscito a prodigal son of Partenope: Gigi D’Alessio, who performed with a historic admirer ofNaples, Renzo Arbore (and his Orchestra). In 2011, the agora of Partenope welcomed Marco Mengoni while 2012 was inaugurated with a concert by the brothers Eduardo and Eugene Bennato, who performed with Noemi, the children’s musical “Scugnizzi” and Teresa De Sio. Finally, the last New Year’s Eve, the one who received the 2013, with a DJ set entrusted to the likes of Planet Funk, Daddy’s Groove, Alex Blacks, Ania J. Bio and the Circus Nero, who for once did not accept the public in the usual Piazza del Plebiscito, but took turns in the spaces of the Lungomare Liberato, ranging from the pedestrian boulevard Dohrn and Via Caracciolo.