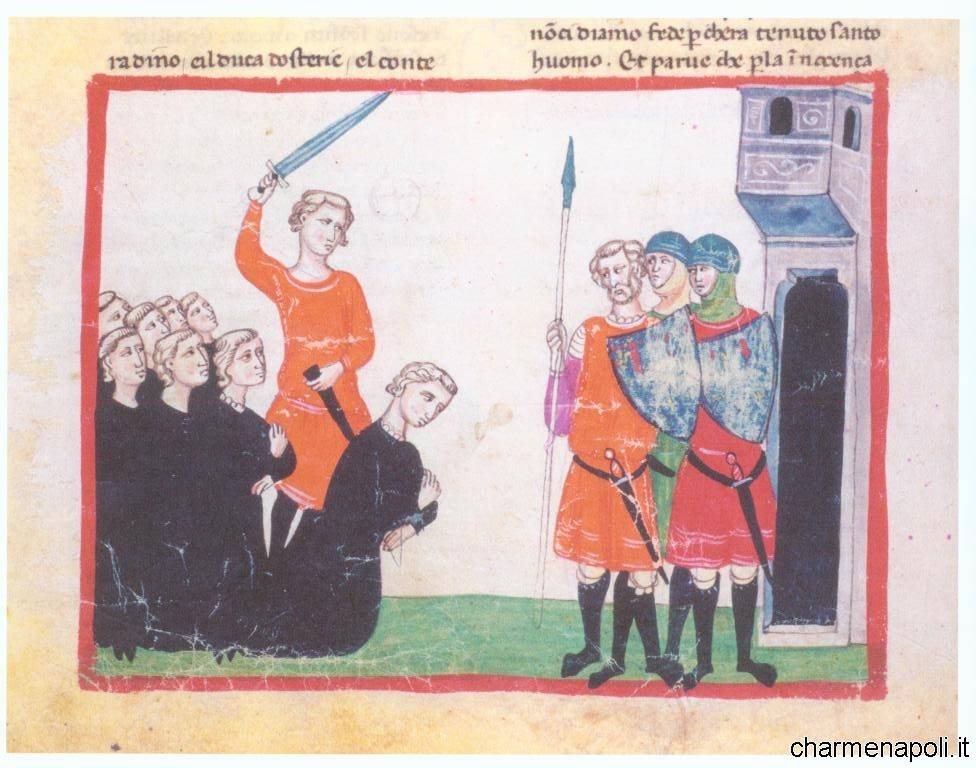 A journey dramatized in places of Corradino, the last emperor of the Holy Roman Empire. Decapitated in Piazza Mercato in Naples on October 29, 1268 is the one organized by the Cultural NarteA a distance of 745 years from the death of the “purple flower of Swabia.” Appointment for the day Sunday, October 26, in the shadow of the Church of Sant’Eligio where NarteA will stage the “romantic myth” of a king who died too young. At 10.30 o’clock in the spotlight for “The Last of the Swabians“, an exciting guided tour dramatized by the Church of Saint Eligius to the Basilica del Carmine, which will alternate history, culture and anecdotes about the passage of the Kingdom of Naples by the Swabians to the house Angevine, retracing the emblematic places of the end of imperial domination and the last heir of Conrad V of Hohenstaufen.

But now let’s jump back more than seven centuries. The story goes that at the dawn of October 29, 1268, in the place where today stands the Church of Sant’Eligio, a few steps from the church of Santa Croce al Mercato, was erected a scaffold where, shortly after being imprisoned and subjected to a mock trial, he was beheaded, just 16 years, the last descendant of Frederick II of Swabia: Corrado V of Hohenstaufen, known for her slender figure and young, “Corradino”. With his death ended a family, but the sacrifice of the young scion of the family Swabian cost to Charles of Anjou, the hatred of the entire population of Naples. But there was Corradino in Naples in those years? And why Anjou wanted him dead? It ‘easy to say.

In 1266, at the tender age of fourteen, Corradino was called in by Italian Ghibelline faction still hoped that intervention of the Swabians to get rid of Anjou who in those months, thanks to the victory of Charles of Anjou, brother of the King of France , on the Swabian Manfred of Sicily, son of Frederick II (defeated and killed in battle, in Benevento), had virtually taken possession of the Kingdom of Naples. Welcomed, Corradino entered Rome triumphantly, laying the groundwork for an easy victory in the South at the expense of the dynasty Alps. It was then that Charles of Anjou, abandoned the siege of the Muslim colony of Lucera, undertook to honor a promise made to the Pope, marched to intercept as soon as the German army. After the initial skirmishes, the two leaders agreed to compete in a pitched battle that took place at the turn of the Kingdom of Naples, in the locality Scurcola near Tagliacozzo, in Abruzzo (now in the province of L’Aquila), 23 August 1268. the outcome of the battle remained uncertain for a long time, until the Angevins managed to get the better of taking advantage of the strength of their cavalry. For the Swabians was the total route. And the battle turned into a horrible massacre: the fallen from the ranks Ghibelline, were counted in the thousands. Many were tortured and then burned alive after having surrendered.

At first Corradino managed to evade capture, starting as humiliating a daring escape into the countryside, host of people who probably did not even know him. In the end, achieved with his companions in Torre Astura, location of the low Lazio coast near Neptune, tried to take to the sea, probably headed for the faithful Pisa. But here he was betrayed, according to legend, by Giovanni Frangipane, lord of those places, ancient ghibellino and friend of the Emperor Frederick II, who had it delivered to the troops of Charles of Anjou. Conducted in Naples in chains, Corradino was imprisoned in Castel dell’Ovo, summarily tried on charges of treason and finally sentenced to death.

Tradition says that he was beheaded on October 29 1268 in the presence of an indignant crowd and riot also held contempt for the treatment and the rights guaranteed to a prisoner of royal blood: an infamous murder, more than a political crime. The friar and historian “minorita” beneventano Isidoro Cozzi relates how, once stood on the scaffold, the boy desperately sobbing: “Oh mother, oh my mother, what news you hear” taking care with dignity most of the pain that the mother of his own unhappy fate. History and legend are interwoven in the report that, before placing the head on the block, he embraced with a look at the square and then slipped off a glove, to launch him into the crowd: an open invitation to avenge; un’ardimentosa and provocative challenge to the usurpers; a solicitation to dynastic continuity.

Well, on this and other aspects of the tragic adventure of Corradino will build the path dramatized staged by artists dell’associazion NarteA. A path that will narrate the Swabian domination, political and economic importance in the Middle Ages who held Napoli through the words of a tour guide, alternating with the “spectacle” of the cultural event with the interpretation of professional actors Marianita Carfora, Antimo Casertano and Sergio Del Prete. The tour will depart from the Church of Sant’Eligio with its famous clock and will continue until you reach the Market Square in the beautiful cloister of the Basilica del Carmine where they still lie the remains of the “purple flower of Swabia”.
“The last of the Swabians”
Cultural Association NarteA
Sunday, October 26, 2014, 10.30 am
Chiesa di Sant’Eligio, Piazza Mercato – Naples
Reservations required, limited seating.
Info: 339.7020849 – 334.6227785
Participation fee: € 10,00 for person