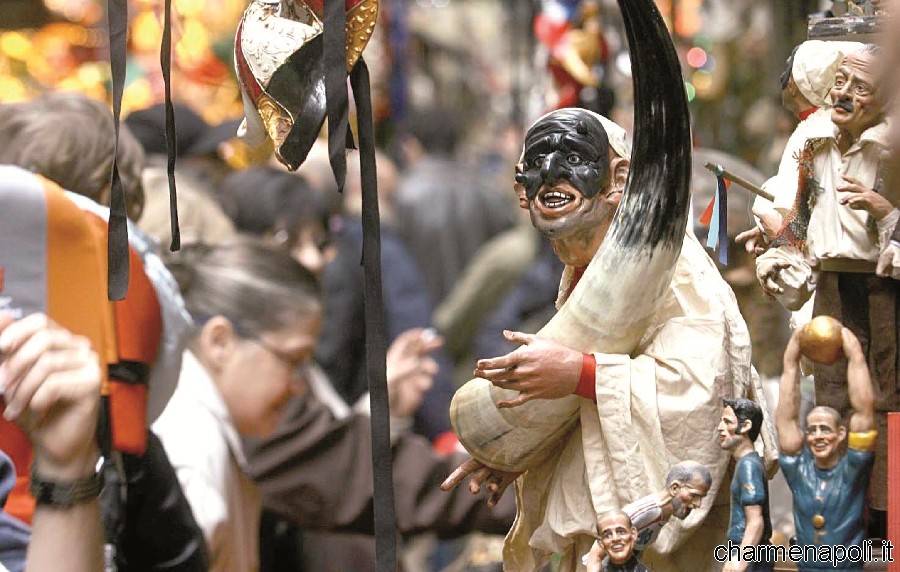 From December 8 to January 6, most Neapolitans have a nativity scene in their homes but, while it is being set up, family members usually argue over the best position for the various figurines (Mary, Joseph, the ox and donkey, the angels, shepherds and the Wise Men following the star; Baby Jesus will of course not be placed in the crib till midnight on Christmas Eve). Furthermore, according to Neapolitan tradition, the scene is not complete without a new figure each year, so it’s time to head to Via San Gregorio Armeno, the street of nativity scenes from which you cannot return home empty-handed. Here there is an endless succession of craftsmen’s workshops where figurines and features are made all year round. Those who prefer the DIY approach will find, wood, cork bark, moss, lights, electric motors and everything they need for their crib scene, while the lazier citizens can choose a ready-made scene in the size they prefer and need only worry about adding the figurines. [charme-gallery]Since the 18th centuries, Neapolitan cribs scenes have been admired worldwide and the artisans of Naples love adding figures that have nothing to do with the birth of Christ but reflect characters from the Bourbon Kingdom of Naples: the innkeeper, the water-seller, the washerwomen, and all the professions under the sun as well as incredibly realistic miniature baskets of fruit, fish and bread. Some artisans make nativity figurines drawing inspiration from contemporary figures and celebrities, including the all time favourite Diego Maradona Once this year’s figurine has been purchased, it’s time to head back home and the inevitable debate on where to place the newcomer, after which the crib scene waits only for baby Jesus to be placed in the manger at midnight on Christmas Eve, a sign that the festivities can begin and everyone can wish each other a merry Christmas.