Home Culture When San Gennaro lost the throne of Partenope 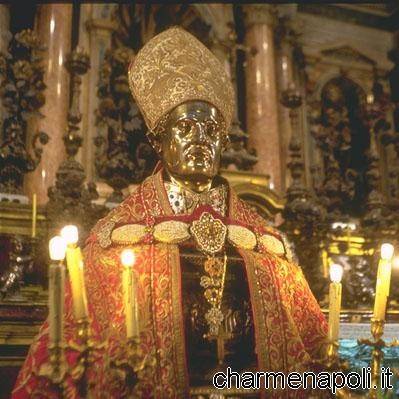 In one of his novels the popular writer Luciano De Crescenzo recounts that Neapolitans pray to different saints according to what they are praying for. Just as the ancient Greeks would pray to Artemis before a hunt and to Ares before a battle, so Neapolitans might pray to St. Ciro if they need a doctor or to St. Christopher if they have to drive to Rome. The author thus defines them as ‘pagans’ when his character Professor Bellavista is asked about the cult, frenzy and miracle of St. Gennaro by a mystified Milanese manager called Cazzaniga. Neapolitans love all the saints but they worship San Gennaro above all others, although the city has been known to betray its patron saint – sometimes in silence, sometimes with a noisy procession, as in the case of Saint Anthony Abbot whose solid silver effigy is paraded through the streets of Naples. [charme-gallery]St. Anthony was even said to have replaced Gennaro as the city’s patron saint in 1799 during the Neapolitan revolution. The attempt to drive out the French army had failed and the Bourbon troops had entered the city’s outlying quarters on the day of the miracle, but the blood did not liquefy. A French general called Championnet realised this could result in an uprising among the entire Neapolitan people so he took his troops to the Duomo and ordered the cardinal holding the ampoule to perform the miracle or he would lose his head. Whether it was the prelate’s trembling hands or the saint’s intercession, the blood liquefied a few seconds later and the danger passed. However the Neapolitans saw this as high treason on the saint’s part and promptly nominated St. Anthony Abbot as their protector. It was not to last long, though, as the saint wasn’t Neapolitan and had never even been to Naples…[charme-gallery]