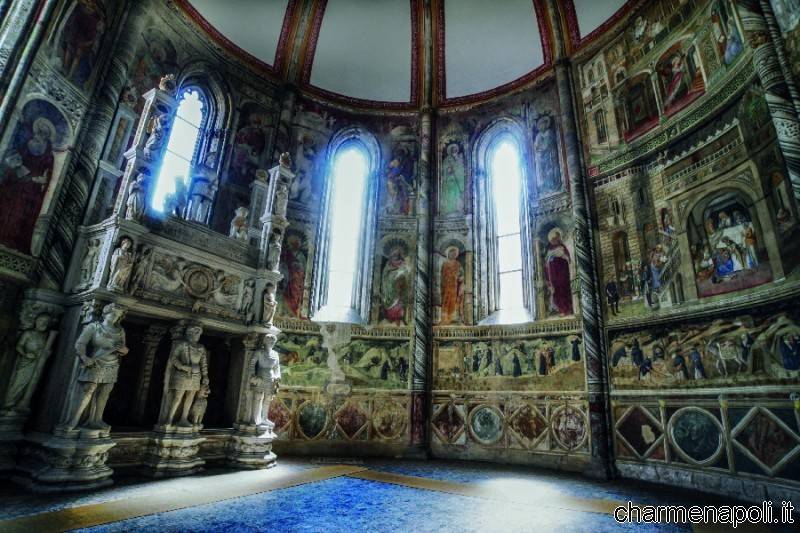 Tombs of the illustrious, the last resting places of sovereigns, poets and rulers embellished with monumental arches, baldachins and sculptures and visited by pilgrims, bear witness to the times when Naples was the garden of Europe and the capital of one of Europe’s most powerful kingdoms. From Virgil and Leopardi to Salvo D’Acquisto and Totò, many famous names chose Naples as their mausoleum. The ashes of the poet Virgil are said to have been laid to rest in the Roman columbarium near the Crypta Neapolitana, but the mortal remains of poet Giacomo Leopardi were certainly moved here in 1939 from the church of San Vitale in Fuorigrotta where he was buried in 1837. Salvatore Di Giacomo, author of the famous song “Era de maggio”, is interred in Poggioreale cemetery alongside other illustrious Neapolitans like Benedetto Croce, Francesco De Sanctis, Vincenzo Gemito, E. A. Mario, Saverio Mercadante, Ferdinando Russo, Luigi Settembrini, Raffaele Viviani, Ernesto Murolo and Nicola Antonio Zingarelli. [charme-gallery]In the nearby Santa Maria del Pianto cemetery lie playwright Eduardo Scarpetta, the great tenor Enrico Caruso, actor Nino Taranto and the unforgettable Neapolitan comedian Antonio De Curtis, a.k.a. “Totò”. In the adjacent 17th century church of Santa Maria del Pianto are the graves of two eminent cardinals and archbishops of Naples Sisto Riario Sforza and Guglielmo Sanfelice, buried in 1877 and 1892, respectively. Many important figures from European, Italian and Neapolitan history are buried in the city. The last emperor of the Holy Roman Empire, the 16-year-old Conradin of Swabia, was buried in the Basilica of Santa Maria del Carmine Maggiore after he was executed by order of Charles I of Anjou following the battle of Tagliacozzo. Nearby is the burial site of fisherman Tommaso Aniello d’Amalfi or “Masaniello”, the charismatic leader of the mid 17th century uprising in Naples, whose remains were scattered by order of Ferdinand IV. Carmine Maggiore also houses the tomb of Luisa Sanfelice, the Neapolitan noblewoman who helped found the Parthenopean Republic in 1799 as recorded in Alexandre Dumas’s novel, while the Royal Basilica of San Giacomo degli Spagnoli in Piazza Municipio houses the tomb of viceroy Don Pedro de Toledo sculpted by Giovanni da Nola. [charme-gallery]One of Naples’ most famous sons is Salvo D’Acquisto, the carabiniere executed by the Nazis on 23 September 1943 to save the lives of 22 innocent civilians, who is buried in the Basilica of Santa Chiara near the tombs of Ferdinand IV of Bourbon, King of Naples and Sicily, and of Maria Cristina of Savoy, wife of Ferdinand II, who died giving birth to Francesco, the last King of Naples. Santa Chiara also houses the celebrated tomb of Robert of Anjou sculpted by Giovanni and Pacio Bertini between 1343 and 1345 and that of Robert’s second wife, the blessed Sancha of Aragon. Ladislaus of Anjou, King of Naples and Jerusalem and the last male descendant of the dynasty lies in the nearby church of San Giovanni a Carbonara, while San Lorenzo Maggiore houses the tombs of Robert’s son Ludovic of Anjou, and his daughter-in law Catherine of Austria. Catherine’s funeral monument, the first Neapolitan work by the great sculptor Tino di Camaino, has a baldachin and a coffin supported by statues and embellished with a colourful mosaic. The Anjous were succeeded in Naples by the Aragon dynasty, most of whose sovereigns are buried in the church of San Domenico Maggiore. King Alfonso I of Aragon was buried under the nave in 1458, while hanging on the wall in the monumental sacristy are 38 wooden coffins containing the bodies of Aragonese kings and princes and other Neapolitan nobles from the 15th and 16th centuries. The coffins, sumptuously draped in silk, brocade and precious fabrics, were gathered here from various churches in 1594 by order of King Philip II of Spain and arranged in two orders: the smaller, largely anonymous coffins below and the larger ones bearing coats of arms above. These include Ferrante I of Aragon, Ferrante II, Queen Joan IV, the Duchess of Milan Isabella of Aragon, and the Marquis of Pescara Francesco Ferdinando d’Avalos, victor at the battle of Pavia against King Francis I of France. Naples was also the last resting place of two Popes: Evaristus, the fifth Pope of Rome from 98 to 106 AD, whose body is said to lie in the church of Santa Maria Maggiore alla Pietrasanta, and Innocent IV who was buried in Naples Duomo in the 13th century. The fifth century Saint Gaudiosus was reputedly buried in the Neapolitan catacombs that bear his name. Saint Giuseppe Moscati, the doctor, researcher and lecturer canonized by the Catholic Church in 1987, is buried in the Gesù Nuovo church, while the tomb of Cajetan of Thiene, co-founder of the Theatine order and proclaimed a saint by Pope Clement X in 1671 is in the Basilica of San Paolo Maggiore. Famous artists buried in Naples include the late Renaissance master Domenico Fontana, whose tomb stands in the Gothic hall of the church of Sant’Anna dei Lombardi.[charme-gallery] The mysterious Neapolitan scholar and alchemist Raimondo di Sangro Prince of Sansevero was laid to rest in 1771 in the city centre’s Sansevero Chapel. Giuseppe Sanmartino, one of the greatest 18th century sculptors, died in Naples in 1793 and was buried in the church of San Domenico Soriano, while the great Humanist Jacopo Sannazaro lies in the church of Santa Maria del Parto a Mergellina, also the last resting place of Jusepe de Ribera the early 17th century Spanish painter known as “Spagnoletto”. Francesco Solimena, another great painter of the late Baroque period was buried in the church of San Domenico and the great philosopher of the 17th and 18th centuries and author of the New Science, Giovan Battista Vico, is buried in the city’s Hieronymite Church.