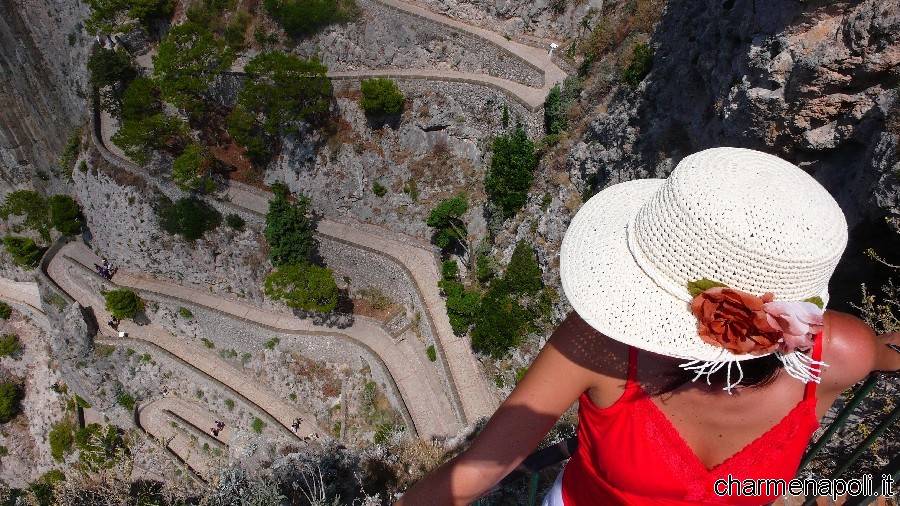 Capri is a glittering pearl where VIPs, nobility, writers and artists seek peace of mind. The Emperor Tiberius was the first of countless illustrious figures who chose Capri for their official residence and many of their sumptuous villas are open, at least in part, to public visits. Villa Malaparte, home of the great Italian writer and director Curzio Malaparte (a.k.a. Kurt Erich Suckert), is located on the rocky spur of Capo Masullo and is a striking example of 20th century rational architecture. Currently closed to the public, Villa Malaparte belongs to a foundation for the promotion of culture and science. On the same promontory stand the Roman remains of Villa Jovis and another architectural jewel: Villa Lysis. The home reflects alternate neo-gothic and neo-classical tastes and was designed by Edouard Chimot in the early 20th century for Baron Jacques d’Adelsward-Fersen, the French poet who left Paris in the wake of sex scandals. Fersen called it Villa Lysis after Plato’s dialogue on friendship and, some claim, homosexual love. Behind Villa Lysys, a path leading to the sea at Lo Capo, passes Astarita Park offering a stunning view of the blue waters of Bocche di Capri. It was donated to the island by banker Mario Astarita who built his spiritual retreat Villa La Falconetta nearby. [charme-gallery]This panoramic area also offers views of the charming Villa Monetella and Villa La Schiava with its colonnades and 19th century majolica floors. Overlooking the Gulf of Naples near Marina Grande harbour is Villa Torricella, residence of Kate and Saidee Walcott-Perry, now a renowned hotel.
Capri’s famous Piazzetta is nearby and the walk offers views of other extraordinary residences. Behind the cathedral of Santo Stefano is the Cerio Museum, one of the island’s main cultural institutions which writer, engineer and naturalist Edwin Cerio set up to commemorate his father Ignazio. The Museum is flanked by a library containing about 5000 books dedicated to the island. Edwin Cerio also built Villa Rosaio at Anacapri in 1911, naming it after the splendid roses in a neighbouring garden. Edwin also designed Villa Orlandi in the centre of Anacapri near Piazza Boffe, which has been part of the Cerio Foundation since 1939. Before being restored and bought by Giuseppe Orlandi, the politician who built the road between Capri and Anacapri, the building was part of an ancient convent. Anacapri is also home to the famous villa of Axel Munthe, the Swedish doctor who fell in love with the island on his first trip in 1884 when he saw the ruins of a small medieval chapel (San Michele) over the ruins of a Roman villa. Munthe designed and furnished the villa himself. Sadly, he was unable to enjoy his creation to the full as his eyesight began to fail and he was forced to move to the shade of Torre Materita. [charme-gallery]Now a museum, Munthe’s Villa San Michele numerous archaeological relics recovered by Munthe or donated by friends, while the garden contains a Greek tomb and a granite sphinx towering over Capri and Marina Grande. Villa Blaesus was the home of Russian poet Gorky who moved to Capri in 1906 after the failed Bolshevik revolution of 1905 and once had Lenin among his guests. Named after the legendary Greek poet, Villa Blaesus was later converted into a hotel and renamed Villa Krupp in homage to Alfred Krupp, owner of the German steel business and builder of Via Krupp which zigzags down from Capri town to Marina Piccola. Gorky moved to Villa Spinola, also known as Villa Behring after its former resident the German doctor who discovered the diphtheria vaccine.