Home Routes Rocks of the sea full of history 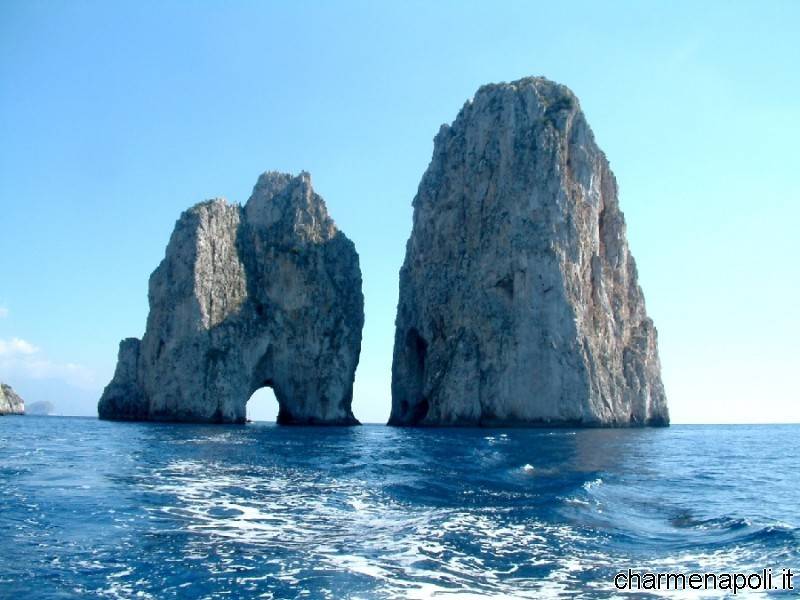 Rock formations. From Capri’s Faraglioni to the Stone of Pozzuoli. History built on rock. At first sight mere rocks or tiny islands rising above the waves, Rovigliano, Megaris, the Faraglioni stacks and the Stone of Pozzuoli were once inhabited and bear witness to the history and legends of the Bay of Naples. In his Naturalis Historia, Pliny the Elder mentions the small island of Petra Herculis (Rovigliano) at the mouth of the river Sarno near Stabiae (Castellammare) and the temple to Hercules which stood there, but it was later the scene of the Longobards’ final bloody battle and home to a monastery devoted the Archangel Michael. [charme-gallery]Under the Spanish viceroys, Rovigliano was equipped with lookout towers watching for Saracen pirates and it was further fortified in the Bourbon age to assume its present-day appearance.Capri’s famous Faraglioni stacks are named after the Greek word for lighthouse (pharos) because Greek settlers would light fires on their summit to guide mariners through sandbanks and reefs. The stack closest to Capri is called Stella and rises to a height of 109 metres, the central Faraglione di Mezzo is 81 metres tall and traversed by a 60 metre long natural tunnel, while Scopolo reaches an altitude of 104 metres.[charme-gallery] A fourth much larger but lower stack, Monacone, is thought to have housed the tomb of Masgaba, the African architect who built some ofCapri’s most luxurious imperial villas. In his Aeneid, Virgil cites the Faraglioni as the home of the Sirens who lured ships to their ruin, but these fishtailed enchantresses could easily have swum to the nearby Sorrento peninsula, where the Normans later built their most famous watch tower, whose bell would sound the alarm if Moorish pirates were approaching, hence its name Punta Campanella. On the shores of near by Neapolis stands the rock of Megaris, which the geographer Strabo reports was inhabited by a colony from Rhodesa round the 9th century BC. [charme-gallery]An ancient myth on the founding of Naples tells that the Siren Parthenope beached herself on the rock after failing to enchant Odysseus, and it was here that the consul Lucullus built his lavish villa almost 1000 years later, whose ruins served as the foundations for Castel dell’Ovo, the famous Neapolitan castle. Along the coast is the Stone of Pozzuoli, on which the Romans built opulent villas to enjoy the spa waters of the Phlegrean Fields.