Home Routes Fontanelle cemetery, the legend of the skulls that fascinates Naples 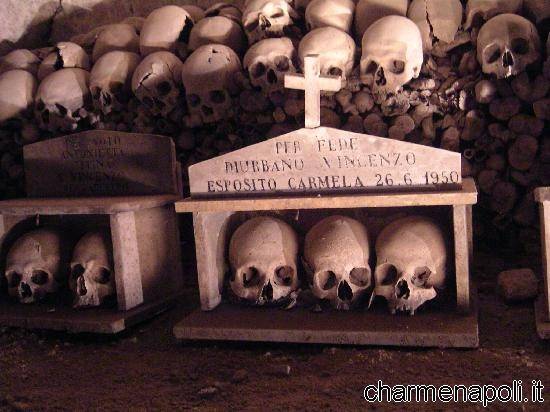 A pair of comfortable shoes and a good dose of courage. And what is needed to venture among the mysteries of the “Valley of the Dead” of Naples, in an unusual journey through the alleys and streets of the district Sanità. A wonderful place, where cliffs are based on the very foundations of the ancient Neapolis. There, directly in the bowels of the hill where the geological features have favored, with the passing of the centuries, the development of large complex cemetery since the Greek era.

It  was the presence of tuffaceous benches arranged along the sides of the mountain to make it possible, thanks to the ease with which this material can be worked and carved, and the extraction of the tuff (later used to build the city on the surface) and the construction of underground tombs and catacombs. Burial sites, then. Objects of faith and devotion from the time when Christianity was in its infancy.

One of all, the most famous: the “Fontanelle Cemetery” , so named because of the presence, in the past, sources of water, but also called the cape ‘e morte (skulls)  or of anime pezzentelle (souls beggars) in memory of a particular ritual that involved taking and arrangement of a skull (called in neapolitan dialect “capuzzella” ), which corresponded to a soul abandoned (“pezzentella” ), in exchange for protection from the deceased. A pit dug into the rock at the heart of which lie the remains of thousands and thousands of people are victims of the plague epidemic of 1656 ( found in the course of the arrangement of via Toledo between 1852 and 1853 ) and the cholera epidemic of 1836. Here are also stacked the remains found in 1934 during the renovation of Acton Street, and those originating from the crypt of the church of San Giuseppe Maggiore, then razed to the ground.

And this is the goal of the charming tour organized by Locus Iste in the first two Sundays of December (1 and 8 , the feast of the Immaculate Conception ) and around Christmas (Sunday, December 22), starting from 10.15. A guided tour of the real mountains of bones, skulls and skeletons of compositions, in a surprising reality in which magic and religion merge and mingle, creating an incredible mix of sacred and profane. An authentic “jumble of faith and error, of mysticism and sensuality”. An “almost pagan worship”, as he described it in the early ‘900 Matilde Serao.

The Fontanelle cemetery, however, is also the place where you can discover the very special relationship that has always linked the city of Partenope to the concept of “afterlife“. A kind of bridge between two worlds: that of the dead on the one hand, that of the living on the other. As well as the place to make the acquaintance of famous people, such as “Capitano” , “Donna Concetta ,” ” Don Pasquale ” and ” Due sposini”, just to name some of the protagonists of stories and legends arose under the vaults of the cemetery of Sanità.

Stories of “anime pezzentelle” . Rumors, like the one linked to the death of Donna Margherita, died at age 54 and whose skeleton rests next to that of her husband, Filippo Carafa, conte of Cerreto (Duchi of Maddaloni), who died at the age of 84 years. The remains of two noble lie within two coffins: their skeletons are the only visible around the complex. Both are dressed. With a particular linked to the skull of Donna Margherita, which is preserved mummified: it has an open mouth, a detail that has spawned the “rumor” that the wife of Don Filippo would be choked to death by a dumpling.

Stories, then. Legends, with even more gruesome details. As one linked to the ghost of the “Capitano” of which, to be honest, there are multiple versions. The spirit of the deceased, outraged by a young man – who, to make fun of the bride (who with so much care and devotion dealt Skull) had stuck a bamboo stick in one of the empty eye sockets of the skull also inviting the his marriage – it materializes, under the guise of a policeman, at the wedding of the couple, causing their death and the death of all the guests.

Stories sometimes veiled with a hint of bitter irony , such as “Donna Concetta”,  to head sweating: a skull placed inside a glass case, which is always well polished, in spite of all the other skulls of the cemetery which instead are covered with dust. For devotees that on the head of “Donna Concetta” is none other than the “sweat of the souls in Purgatory” . Get unique and unrepeatable which still describe the soul and the “character” of a people undaunted, the Neapolitan, able to transform even the most tragic situations into opportunities for redemption and spirituality.