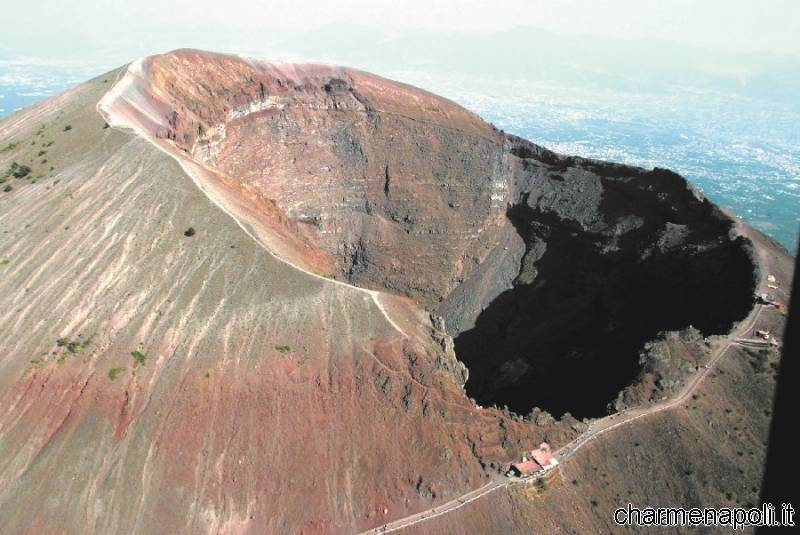 The intertwining of lava trees, the majestic green of the woods , the crown of cognoli of Mount Somma, the breathtaking landscapes of the Valley of Hell, the charm of the Naples Bay , the archaeological excavations . His Majesty dominant , Vesuvius, Naples blessing of the people , is one of the main Campania. Honor and pride of the Felix Earth , but also a perennial threat on the fate of thousands and thousands of people .

The ” grand old man” peaceful slumbers . It can be admired , sly , in all its centuries-old and majestic beauty . In his coffers are hiding treats and goodness that only these fertile lands are able to forge : grapes of the most rich and tasty , that produces delicate wines such as Doc Lacryma Christi. Apricot sweet and tender , the kind that melt in your mouth . And figs tasty green color and blood type.[charme-gallery]

Good to see, in fact. But even to try. Why Vesuvius is admired with the eyes, but also with the palate. A rarity , to be honest . It deserves a rightful place in the forefront of the special gallery of the masterpieces forged from planet earth , along side the Grand Canyon , the Black Forest and the Reef . The highest place among the 7 wonders of the world , the truth is , only by a whisker Vesuvius failed to earn it seriously, even touching the final of the international competition ” New7Wonders ” devised by the New Open World Corporation to flush out the ” new seven wonders of the world. ” Want to put , on the other hand , the inimitable charm that carries the volcano sung by Seneca and Virgil , Boccaccio and Vitruvius ? And then what other “wonder” in the world can boast the legendary history of this cone ? What other volcano can boast of having inspired painters and artists ancient and modern , songbooks and poets as it has, over the centuries , the mountain of “ Funiculì Funiculà ” ?[charme-gallery]

Pompeii, Herculaneum and Oplontis must , tragically , their fame to the destructive fury of the crater. And the slaves of the rebel gladiator Spartacus succeeded in becoming game of the Roman legionaries just facing them on the slopes of the mountain on fire . The same borboni robbers that immediately after the unification of Italy , held in check the Piedmontese troops , found here their shelters . And again: Vesuvius is the only mountain to guard along its steep sides , the archaeological remains of villas and town dating back to ancient Rome , arrived almost intact to the present day thanks to the destructive before, and ” conservative ” then , lava , ash and lapilli .

Some two thousand years ago , went so far as to pay with his life for his love of Sterminator Vesevo . Pliny the Older, this is his name , he breathed his last , in fact, on the beach di Stabia , struck down by the vapors and gases expelled in the infamous eruption in 79 AD canceled Herculaneum, Pompeii and Oplontis . It was just his style describe things live . For nothing in the world the former prosecutor of Narbonne Gaul he would have missed that event. Precisely for this reason Pliny is recognized today as the first volcanologist of the story and in his honor we use the term to define a Plinian eruption of catastrophic eruption , type of explosive . The famous writer was born in Como at his home in Miseno when he was joined by a letter of support sent to him by a friend of Herculaneum. He did not think twice about it. Some armed galleys and sailed from the town flegrea heading towards the nearby coast Vesuvius to administer relief to the unfortunate inhabitants at that time beaten by the fiery cloud . The fury of Vesuvius, however, did not allow him any docking and so Pliny was forced to direct the bow towards Stabiae (modern Castellammare di Stabia) where there died , probably suffocated , 56 years . The details of the eruption of 79 AD and the last moments of the life of Pliny the Older have come down to us through the story of those dramatic moments that made his nephew Pliny the Younger.[charme-gallery]

Thanks to the incredible beauty and countless testimonies that overlap in the pages of its long history , Vesuvius, postcard of Naples and the Gulf , still active volcano of continental Europe together with the Sicilian Etna , deserves, therefore, a place of honor among the brightest pearls of the earth. A rarity that has something like 25 thousand ( and pass) years of life and a fair number of ” awakenings ” thanks to which the entire ecosystem surrounding appearance has changed several times . The last was in 1944 , during the Second World War. Since then, the volcano sung by Giacomo Leopardi and Victor Hugo came into hibernation and everyone is hoping that there is still a long time ” the Beautiful asleep in the Gulf ,” as he put it, years ago, the journalist and writer Mimmo Carratelli , leaving admire placid and crafty in all its majestic and worrying dominance of Naples.